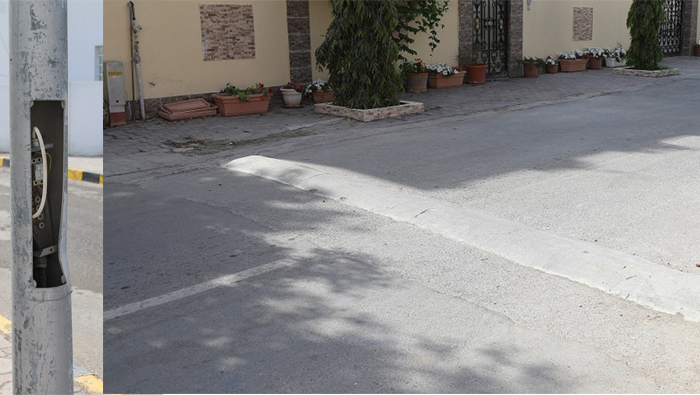 Muscat: The Muscat Municipality has revealed the top three issues it faces while maintaining public roads and spaces of the governorate.
In a recent report, the authority detailed that it regularly deals with vandalised street lights, illegally installed speed bumps, and damage to public roads.
All the aforementioned acts are in violation of the municipality’s rules and regulations, each resulting in a negative impact on the Sultanate’s economy as more resources are expended on maintenance.
One of Muscat municipality`s roles in the governorate is to implement various development and cosmetic projects such as roads and lighting. A number of negative phenomena related to roads and lighting have been noticed recently, including tampering with lighting lamps, installing illegal speed bumps, and damaging streets.
Light tampering
Vandals who tamper with public lighting systems by removing their security panels are putting the general public at serious risk of harm.
Such a high-risk violation can lead to electrocution. Article 2 of the Muscat Municipality’s Local Ordinance No. 32/97, stipulates that “people are prohibited from doing any damage to municipal facilities, equipment and supplies, whether by tampering, cracking, sabotage, etc. and in particular: irrigation systems and water connections, toilet supplies and connections, electricity meters, water and telephones, chairs, umbrellas, games and lighting, parks, squares, public squares, streets, address boards, and anything else belonging to the municipality.”
Municipal authorities have launched a variety of awareness campaigns to deter people from vandalising public property.
Speed bumps
Illegally installed speed bumps have become a growing nuisance. The practice has caused significant damage to cars and public roads as they lack the appropriate technical standards and are usually installed in unnecessary locations. Many lack warning signs and are not painted properly.
Individuals or groups can submit requests for speed breakers by contacting the Directorate General of Muscat Municipality, the Wali’s Office, and the Royal Oman Police Traffic Engineering Department.
Damage to public roads
Municipal authorities also detailed in their report that companies regularly damage public roads by ignoring the municipality’s specifications. This includes earthmoving machinery and conducting excavation work under public roads without authorisation. Such acts pose serious dangers to drivers and vehicles and could additionally result in water accumulating in exposed areas.
Article 16 of Decision No. 212/2017 states that fines of up to OMR2,500 will be dished out for any excavation work or earthmoving machinery work that is not approved by the municipality.