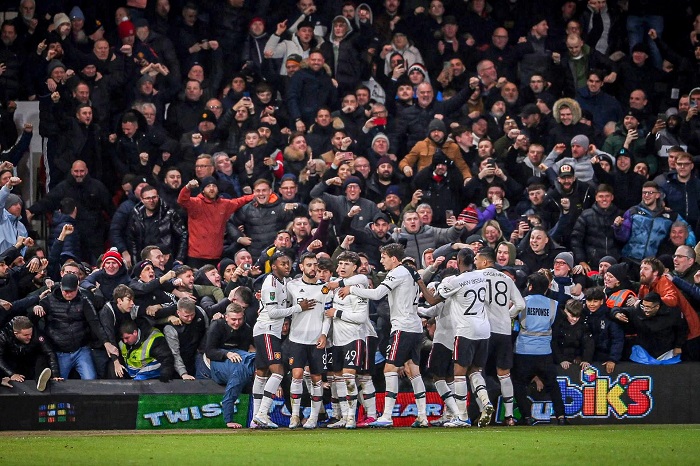 Marcus Rashford's marvellous solo effort gave United the lead, but Wout Weghorst's first goal in a Red Devils uniform, together with Bruno Fernandes' late third, gave Erik ten Hag's squad a dominating lead going into the second leg at Old Trafford. Rashford has now scored 10 goals in 10 games, and even the decision to attack the defence with such conviction says a lot about how confident England forward is right now. Forest had to reassemble, and if the next critical call had gone in their favour, the evening might have been different.

Due to Rashford's sloppy pass, Morgan Gibbs-White was offered the chance to break, and Surridge's pass to him appeared to have been perfectly timed for the striker to caress the ball into the far corner of David de Gea's goal. However, the replays demonstrated that Surridge was merely offside.

Forest competed throughout on a boisterous night by the Trent and believed they had an equaliser in the first half until Sam Surridge's shot was disallowed for offside. However, it was the United fans who were singing of Wembley and hoping to end their six-year trophy drought.

The FA Cup is already over for Nottingham Forest, therefore they will have a free weekend. They will play the second leg of the Carabao Cup semifinal against Manchester United on Wednesday. On Sunday, February 5, Forest plays host to Leeds in the Premier League.

The next game for Manchester United is on Saturday when they host Reading in the FA Cup. The Carabao Cup final spot is on the line as Erik ten Hag's team hosts Forest at Old Trafford on Wednesday.

"For strikers, it is always important," said Ten Hag when asked about Weghorst's first goal for the club as quoted by Sky Sports.

"I think he did a great job against Crystal Palace and Arsenal with pressing and [being a] target, his movements. I think the goal of Bruno at Crystal Palace, was part of it because he makes the right move to the front post. The goal of Rashford against Arsenal, he was part of it. He made the space for Rashford by dragging the centre half away. But strikers are there to score goals and when they don't score goals they are not happy. It was important for his confidence. This was one of the ways that he can score goals, by being in the box and being present," said the Manchester United head coach. (ANI)