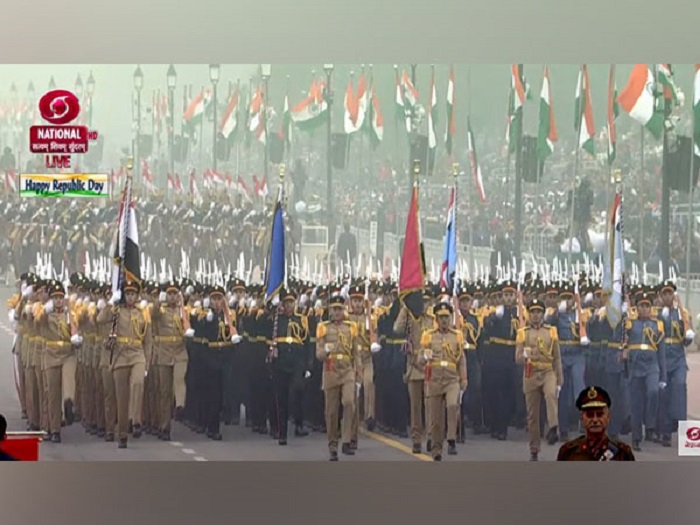 The Egyptian military contingent led by Colonel Mahmoud Mohamed Abdel Fattah El Kharasawy consisting of 144 soldiers represented the main branches of the Egyptian armed forces. Egyptian President Abdel Fattah El-Sisi attended the parade as the chief guest. It is for the first time that an Egyptian leader has been invited on India's Republic Day.

The Egyptian forces have considered it an honour and privilege to participate in India's Republic Day parade. The Egyptian contingent carries the legacy of one of the oldest regular armies known to humanity.

El-Sisi, who is on a four-day visit to India, accompanied by a high-level delegation witnessed the Republic Day Parade. After attending the Republic Day parade, the Egyptian President will attend an 'At-Home' reception by President Droupadi Murmu at Rashtrapati Bhavan. Later, El-Sisi will be called on by Vice President Jagdeep Dhankhar and the two sides will hold a meeting.

Notably, India and Egypt have enjoyed strong defence ties. There was close cooperation between the Air Forces, with efforts at jointly developing a fighter aircraft in the 1960s. IAF pilots had also trained Egyptian pilots from the 1960s until 1984.

India and Egypt are celebrating 75 years of establishment of diplomatic relations this year. India has also invited Egypt as a 'guest country" during its G20 Presidency. Furthermore, the visit of El-Sisi is seen as a visit to bolster ties between India and Egypt and further deepen them.

India and Egypt have "warm and friendly relations marked by civilizational, cultural and economic linkages and deep-rooted people-to-people ties", according to the statement released by the Ministry of External Affairs.

India and Egypt, two of the world's oldest civilizations, have enjoyed a history of close contact from ancient times. Both countries share a close political understanding based on a long history of contact and cooperation in bilateral, regional, and global issues.

The commander of the Egyptian Army contingent, Colonel Mahmoud Mohamed Abdel Fattah El Kharasawy, expressed his delight at being invited to participate in India's 74th Republic Day parade on Thursday, hoping that the gesture will go a long way towards boosting bilateral ties and friendship between India and Egypt in future.

"We have the pleasure of participating in India. This is the first time we are visiting India. It is a great country with a civilisation as old as ours in Egypt. We both are old civilisations. We have been here for four days and practised with our friends in the Indian Army. Our relationship is strong and we love supporting each other," Elkharasawy told ANI on Wednesday.

On the bilateral ties between India and Egypt, he said, "Our countries share a strong bond and have a great relationship. I hope this friendship goes from strength to strength in future. We also hope more people from India visit Egypt."

Notably, a joint exercise known as Cyclone 2023 between Indian Army and Egyptian Army's joint is being carried out in Rajasthan's Jaisalmer.

The Additional Directorate General of Public Information in a tweet on January 23 said, "Exercise #Cyclone 2023 #SpecialForces troops of #IndianArmy and #EgyptArmy exercised Special Heliborne Operations during the ongoing joint exercise at #Jaisalmer."

It is pertinent to mention that Cyclone 2023 is the first-ever exercise that is taking place between the special forces of the Indian Army and the Egyptian Army.

The 14-day-long exercise which is being carried out in the deserts of Rajasthan engages both the contingents to advance special forces skills such as Sniping, Combat Free Fall, Reconnaissance, Surveillance and Target Designation, sharing of information on weapons, equipment, innovations, tactics, techniques and procedures.