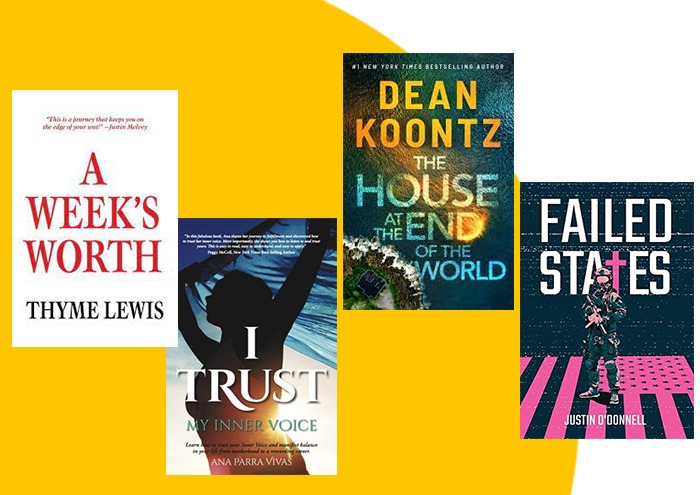 The House at the End of the World
by Dean Koontz

Soon no one on Earth will have a place to hide in this novel about fears known and unknown by #1 NYTimes bestselling master of suspense Dean Koontz. In retreat from a devastating loss and crushing injustice, Katie lives alone in a fortress-like stone house on Jacob’s Ladder island. Once a rising star in the art world, she finds refuge in her painting.

A neighbouring island houses a secret government research facility. And now two agents have arrived on Jacob’s Ladder in search of someone―or something―they refuse to identify. Although an air of menace hangs over them, an infinitely greater threat has arrived.

Katie soon finds herself in a terrifying battle against an omnipresent terror that could bring about the end of the world.

A Week’s Worth
by Thyme Lewis

To those who cross Mac, punishment comes on a daily basis. With a skill set rivaling special operatives in the world’s most elite gangs, Mac navigates the country working for FEMA, helping those less fortunate resurrect their lives after the USA’s most horrific natural disasters.

In A Week’s Worth, Mac receives a call that sends him home to California, where he will face a more personal disaster: His mother’s health is failing. His good intentions to help are met with resistance. And people keep dying around them. With a burning desire to right the wrongs of the past, Mac hopes this last road trip to Los Angeles will make their time together unforgettable. “Lewis paints a wry and unapologetically honest depiction of his characters,” says one reviewer.

I Trust My Inner Voice
by Ana Parra Vivas

The author, a well-balanced Lifestyle Manifestation Expert, gives you a blueprint on how to TRUST your Inner Voice. She is a perfect example of how working to change your self-perception can have incredible and tangible benefits. Ana faced many difficulties in her life, and these difficulties challenged her beliefs in herself. She decided to study herself and, ultimately, she discovered the tools that brought her balance as she recovered her personal power.

This book is not only the story of how Ana found balance in her life, but also a guide for anyone struggling to take the next steps toward the life of independence and freedom they desire. The Inner Voice is a powerful tool, and this book can help readers harness that power.

A grim, fast-paced speculative thriller in the vein of Cormac McCarthy's The Road. It is a tale that deals with political and violent themes while calling into question the fundamental clash between security and liberty.

In an America on the edge of extinction, Thomas La Stella serves as a Deportation Force officer. Tom is old enough to remember America before Dayton Day, the attack that finally brought the country to its knees and the earth towards its death.

Still fighting for hope, Tom clings to his pregnant wife and begrudgingly serves a government on the brink of revolution. When the president goes missing, a new radical force rises from within and threatens every hope Tom has for a better future.