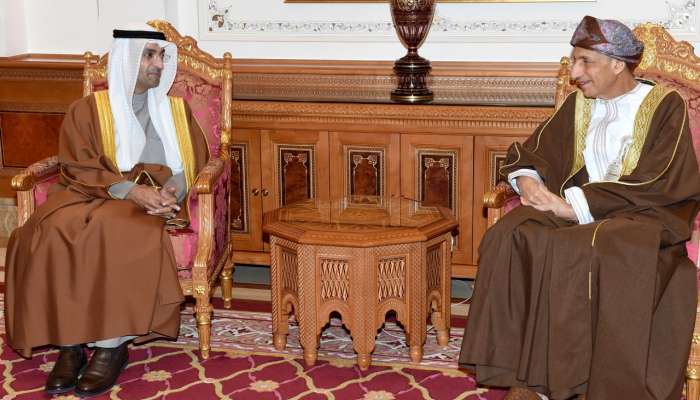 Muscat: On behalf of His Majesty Sultan Haitham bin Tarik, His Highness Sayyid Fahd bin Mahmoud Al Said, Deputy Prime Minister for the Council of Minister received on Wednesday Dr. Naif Falah Al Hajraf, GCC Secretary General to bid him farewell at the end of his tour of duty.

The meeting reviewed the march of the GCC and exchanged views on regional and international developments.

During the meeting, HH Sayyid Fahd affirmed that the GCC is a main pillar for security, stability and comprehensive development in the region. The GCC countries, said HH Sayyid Fahd, always seek to maintain and promote ties of cooperation with different countries of the world.

HH Sayyid Fahd commended the sincere efforts made by Al Hajraf during his mission as GCC Secretary General. He affirmed that these efforts have contributed remarkably on the joint GCC action.

In his turn, Al Hajraf extended his thanks and appreciation to the Sultanate of Oman for its constant support for the GCC, wishing the Omani leadership and government permanent success.