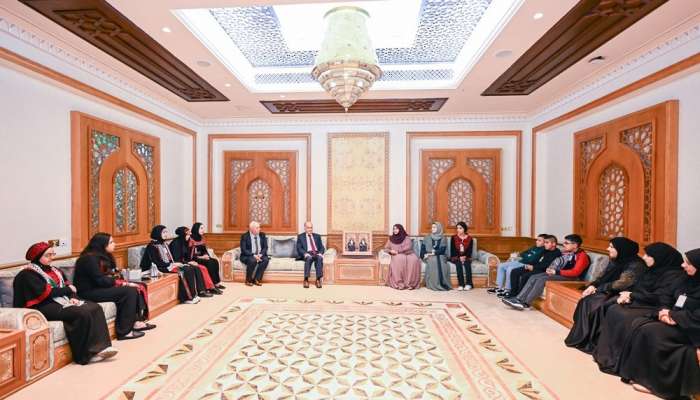 Muscat: Dr. Laila Ahmed Al Najjar, Minister of Social Development, has received Dr. Tayseer Jaradat, Ambassador of the State of Palestine to the Sultanate of Oman, and members of a Palestinian delegation comprising offspring of Palestinian martyrs and children of Palestinians jailed in prisons of Israeli occupation forces.

During the meeting, the minister underscored the significance of the visit which, she said, embodies the depth of fraternal relations and the strong bonds between Oman and Palestine.

The meeting was an opportunity to exchange expertise and study various aspects of social areas, including the childhood sector, Dr. Laila added.

The Palestinian ambassador commended Oman’s permanent stance in supporting the State of Palestine. He valued the Social Development Ministry’s gesture to announce the social club of the Palestinian community in Oman.

The meeting was attended by Assayida Maani Abdullah Al Busaidi, Director General of Family Development at the ministry, as well as other officials and employees operating in the childhood welfare field.