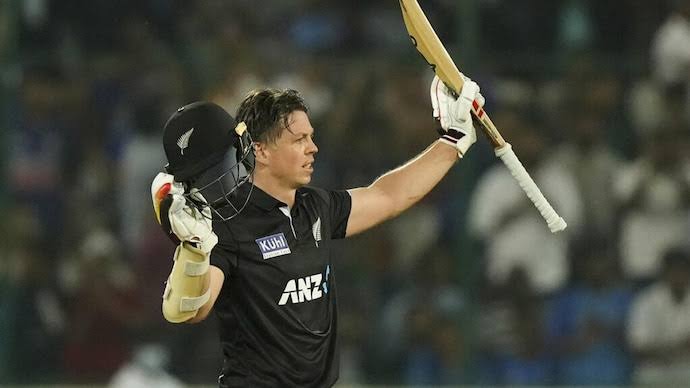 Hyderabad : Michael Bracewell's incredible ODI batting numbers got even better after another stunning knock in Hyderabad in the first ODI between India and New Zealand.

In just 57 balls, he reached his second ODI century which is also the third-fastest ODI century by a New Zealand batsman. With the century, Bracewell also equalled a rare record by MS Dhoni for being the first batsman in ODI history to score more than 100 runs from the number seven or lower position.

Bracewell entered the game at No. 7, and the job that lay before him seemed insurmountable: his team needed 240 runs to win in just over 25 overs, and there were only five wickets left to be taken. The Kiwi all-rounder warmed up off Mohammad Shami with two boundaries in an over and didn't look back after that.

New Zealand soon lost Tom Latham at the other end, but Bracewell was content being the one-man army in this Kiwis line-up, going hammer and tongs at the Indian bowlers with some incredible shots.

The innings almost overshadowed the work of Shubman Gill earlier in the day, who belted a double hundred in India's 349/8.

Coming to the match, a top-class bowling effort from Mohammed Siraj outweighed Michael Bracewell's heroic ton and a threatening partnership with Mitchell Santner, as India overcame a late onslaught from these two all-rounders to clinch a 12-run win over New Zealand in the first of the three-match series against the Kiwis at Hyderabad on Wednesday.

All-rounder Daryl Mitchell was the pick of the bowlers for Kiwis with 2/30. Henry Shipley took two wickets, while Lockie Ferguson, Blair Tickner and Mitchell Santner picked a wicket each.

But a seventh-wicket stand between Michael Bracewell and Mitchell Santner changed everything. The batters thrashed Indian bowlers all over the park. Bracewell scored his second ODI ton, while Santner also scored a half-century.

Mohammed Siraj, after taking early wickets, helped India make a comeback, dismissing Santner for 57 and breaking the 162-run stand. With 20 runs needed in final over, Shardul Thakur dismissed Bracewell for a valiant 140 of 78 balls, consisting of 12 fours and 10 sixes.

India won the match by 12 runs and took a series lead of 1-0. Shubman Gill won the 'Man of the Match' for his double ton.