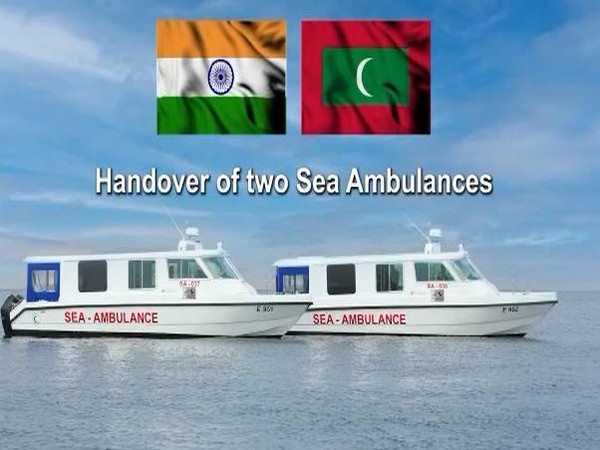 Male: India handed over two Sea Ambulances to Maldives on Wednesday that were procured under the Indian Grant Assistance scheme.

External Affairs Minister S Jaishankar and Maldives Foreign Minister Abdulla Shahid attended the handover ceremony held at Noonu Manadhoo today. A number of significant Memorandums of Understanding were exchanged between Maldives and India in various fields, as part of Jaishankar's visit to Male.

"During the ceremony, both Foreign Minister Shahid and External Affairs Minister Dr. Jaishankar also witnessed the handover of two sea ambulances from the Government of India to the Ministry of Defence of Maldives which was a project carried out under the High Impact Community Development Project Scheme," the Maldives government said in a statement.

As part of the close cooperation between India and Maldives under the Indian Grant Assistance scheme, Maldives's Defence Ministry has procured two Sea Ambulances. A total of 6.2 million Rufiyaa was allocated to the Maldives for the procurement of Sea Ambulances.

The scope of the project is to procure two new Sea Ambulances to strengthen the healthcare delivery system in the Maldives. It will also help with the inter-island travels of patients in emergency. The Maldives government thanked the Indian government for the Sea Ambulances.

Jaishankar is on a visit to Male to see the signing of agreements related to the bilateral development cooperation, ground-breaking/inauguration/handing-over.

External Affairs Minister said that all Indian projects in the country adhere to the tenet of the Indian development cooperation approach which lays emphasis on transparency, and competitive pricing.

"Needless to say, all these projects adhere to the basic tenet of the Indian development cooperation approach which is the emphasis on transparency, full participation, ownership of the host country and competitive pricing," he said.