Important that we did not concede a goal, says India coach Reid after goalless draw against England 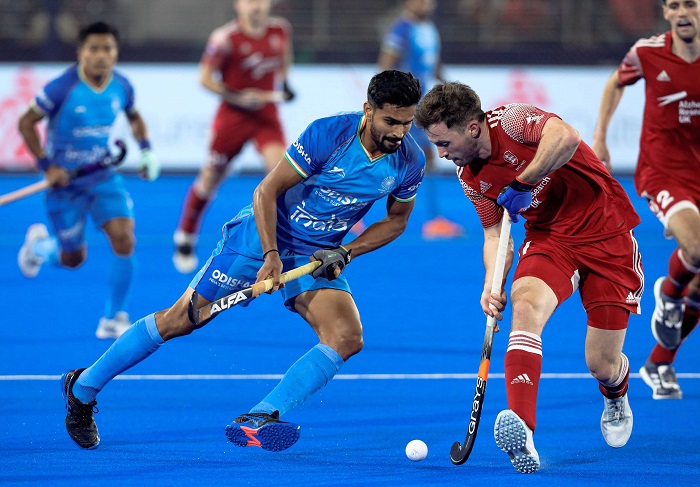 Rourkela : Following his side's goalless draw against England at the FIH Men's Hockey World Cup, Indian head coach Graham Reid expressed happiness that his team did not concede a goal, but was disappointed that his side gave away too many penalty corners.

India played a goalless draw against England to take home one point each in a crucial Pool D, Hockey World Cup match at the Birsa Munda International Hockey Stadium in Rourkela on Sunday. "It is very important that we did not concede a goal. We did give away too many penalty corners," said Reid in a post-match press conference.

"We are getting chances to score. We also decide who will take those PCs. But they (England) defended well, tried variations," said Harmanpreet.

Reid said that both sides were bound to feel disappointed after a goalless draw that offered many chances to score to both the sides. He also admitted that they did not start well.

"Both teams will feel that way when the match ends in a 0-0 draw and a lot of opportunities were available to both the sides. It was a missed opportunity, we need to get better results in the circle. But I am happy with the fight and committment shown today. It was a nice game to watch, there was a lot of high-skill hockey played. Both teams will be in high stead for the next match," said the coach.

The Indian team looked to take an early lead against England in the crucial game and hit the blocks running from the word go as they penetrated the English circle in the opening minutes.

Harmanpreet Singh who had an off day in the previous game looked in spectacular touch. He was impressive on the field with his interceptions and tackles in the opening minutes, putting pressure on the opposition.

The Indian defence line had lapses on the field and moments where the English team were able to make runs into the hosts' circle, conceding a total of five penalty corners (PCs) in a span of a few minutes. However,

PR Sreejesh stood tall and made sure that India maintained a clean sheet.The hosts were also able to get a PC in the 13th minute of the first quarter, thanks to a brilliant run by Mandeep Singh into the opponent's circle. Hardik Singh injected the ball into the circle while taking the PC, but Harmanpreet could not gather the ball cleanly as India missed the opportunity to take the lead.

The second quarter started with the English team on the attack. They secured yet another PC only to be denied a goal as the Indian defence stood tall and showed great grit.

Another goalless quarter ensued after defenders from both sides showed great resilience, denying the goal. The first half ended with the teams battling it out neck to neck and ending with a scoreline of 0-0.

The Indian team started the third quarter with a press into the English circle, but the defenders again came into play to deny the hosts a goal.

In the 38th minute, Hardik had a dazzling run down the middle as he drove past English players before entering the circle and taking a shot at the goal but Payne made a save once again. Hardik's stick struck Rushmere in the face during the process leaving him bleeding profusely as the medical personnel rushed onto the pitch.

Sam Ward had the best chance of the game as he was left unmarked inside the circle, but Sreejesh stormed forward to put pressure on him and closed him down, prompting Ward to attempt the chip.

India did score a goal in the 45th minute as Abhishek managed to find the back of the net but in the process committed a foul, ruling out the goal for the hosts. The team had lost all its reviews and hence could not challenge the decision. The third quarter too ended in a deadlock as neither team could find the goal.

The fourth quarter saw the Indian team making numerous penetrations into the English circle but the England goalkeeper Oliver Payne's resilience denied the hosts a goal each time.

England had the upper hand in the final quarter with India down to 10 men after the last match's hero Amit Rohidas was issued a green card. Jarmanpreet Singh again got a green card in the 57th minute to raise eyebrows from head coach Graham Reid.

India survived the final nervy minutes of the fourth quarter with England managing to get a PC with 19 seconds left on the clock. However, the English team failed to convert it, bringing the game to an end with both teams sharing the honours in a closely fought contest.

England goalkeeper Oliver Payne was chosen as the Player of the Match. England maintains its lead in Group D with four points.

India, which has four points as well, is second due to a lower goal difference. To top the group and confirm direct qualification for the quarterfinals, India may need to beat Wales by a large margin in its final group match in Bhubaneswar on January 19.