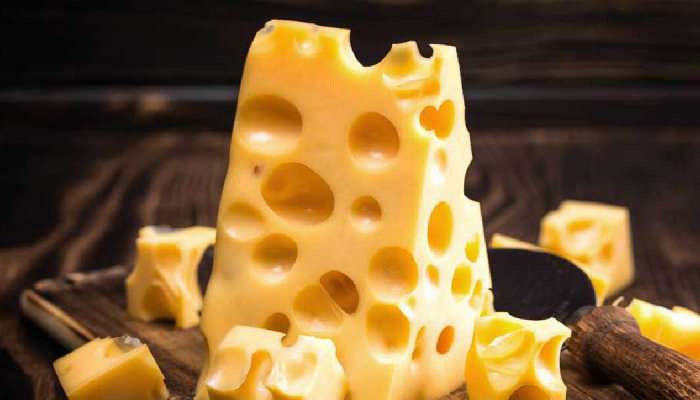 Cheese, which is rich and creamy, tastes delicious on a cracker, with fresh fruit, or sprinkled on top of a bowl of chilli. The majority of Americans simply love it.  The annual per capita consumption is 40 pounds, or slightly more than 1.5 ounces per day, suggests The Washington Post, an American daily newspaper.

However, when people talk about their fondness for cheese, it's often in a guilty way, as in, "Cheese is my weakness." "Cheese is packed with nutrients like protein, calcium and phosphorus, and can serve a healthy purpose in the diet," said Lisa Young, an adjunct professor of nutrition at New York University, according to The Washington Post.

As per the outlet, research shows that even full-fat cheese won't necessarily make you gain weight or give you a heart attack. It seems that cheese doesn't raise or reduce your risk for chronic diseases, such as heart disease and Type 2 diabetes, and some studies show it might even be protective.

It's easy to see why people might feel conflicted about cheese. For years, the U.S. dietary guidelines have said eating low-fat dairy is best because whole-milk products, such as full-fat cheese, have saturated fat, which can raise LDL (bad) cholesterol levels, a known risk for heart disease. Cheese has also been blamed for weight gain and digestive issues such as bloating. It turns out, though, that cheese may have been misunderstood.

Yes, it's high in calories: Some types have 100 calories or more per ounce. And it's rich in saturated fat. So why is it okay for most people to eat it? "Cheese is more than its saturated fat content," saID Emma Feeney, an assistant professor at the Institute of Food and Health at University College Dublin who studies the effect cheese has on health.

Old-school thinking on nutrition has been focused on individual nutrients -- such as fats or protein -- that either promote or prevent disease. It's not clear that this is the wrong approach, but nutrition experts are now putting more emphasis on the entire food and how its structure, nutrients, enzymes and other components interact with one another.

When milk is transformed into cheese, the process changes the way the nutrients and other components in it are chemically arranged. This has an effect on how it's digested and processed by the body, which can lead to health effects that are different from the effects of eating the same nutrients in another form, such as butter.

In 2018, Feeney led a six-week clinical trial in which 164 people each ate an equal amount of dairy fat either in the form of butter or cheese and then switched partway through the study.

"We found that the saturated fat in cheese did not raise LDL cholesterol levels to the same degree as butter did," she said.

Experts have varying theories about why the saturated fat in cheese is less harmful. "Some studies show that the mineral content in cheese, particularly calcium, may bind with fatty acids in the intestine and flush them out of the body," Feeney saID. Other studies suggest that fatty acids called sphingolipids in cheese may increase the activity of genes that help with the body's breakdown of cholesterol.

When cheese is made, it gains some beneficial compounds, too. "Vitamin K can form during the fermentation process," saID Sarah Booth, director of the Vitamin K Laboratory at the Jean Mayer USDA Human Nutrition Research Center on Aging at Tufts University in Boston. The vitamin is important for blood clotting, and bone and blood vessel health.

And as a fermented food, "both raw and pasteurized cheeses contain good bacteria that can be beneficial to human gut microbiota," says Adam Brock, vice president of food safety, quality and regulatory compliance for Dairy Farmers of Wisconsin. This good bacteria, found mostly in aged cheeses such as cheddar and Gouda, help break down food, synthesize vitamins, prevent bacteria that cause illness from getting a foothold, and bolster immunity.

Weight gain: Cheese is a concentrated source of calories. But studies suggest that you don't need to skip cheese to keep the scale steady. In one, published in the New England Journal of Medicine, researchers set out to determine which foods were linked to weight gain by following 120,877 men and women in the United States for 20 years, looking at their weight every four years. Cheese wasn't associated with either gain or loss, even for people who increased the amount of it they ate during the study. One reason cheese may help control weight is that it may reduce appetite more than other dairy products.

Cardiovascular disease: A large meta-analysis of 15 studies published in the European Journal of Nutrition that looked at cheese's effect on cardiovascular disease found that people eating the most (1.5 ounces per day) had a 10 percent lower risk than those who didn't eat any. Other analyses have found that cheese doesn't seem to affect heart disease risk either way.

Diabetes and hypertension: Cheese and full-fat dairy also seem to be linked to a lower risk of both. In a study of more than 145,000 people in 21 countries, the researchers found that eating two daily servings of full-fat dairy or a mix of full-fat and low-fat was linked to a 24 and 11 per cent reduced risk of both conditions compared with eating none. Eating only low-fat dairy slightly raised the risk. And among people who didn't have diabetes or hypertension at the start of the nine-year study, those who ate two servings of dairy each day were less likely to develop the diseases during the study.

Lactose intolerance: Lactose, a sugar in milk, can be difficult for some people to digest, leading to diarrhoea, bloating and other gastrointestinal symptoms. But the bacteria used to make cheese digests most of the lactose in the milk, says Jamie Png of the American Cheese Society. Much of the lactose that remains is found in the whey, which gets separated from the curds toward the end of the cheesemaking process and is drained off. If you're sensitive to lactose, stick to hard or aged cheese such as cheddar, provolone, Parmesan, blue, Camembert and Gouda, and minimize fresh soft cheese like ricotta and cottage cheese.

How much to eat of it

Even though cheese itself doesn't appear to have negative effects on health, how you incorporate it into your overall diet matters.

In much of the research suggesting a neutral or beneficial effect, the highest amount of cheese people ate each day, on average, was about 1.5 ounces, but in some cases it was up to 3 ounces. (An ounce of cheese is about the size of your outstretched thumb.)

In some studies, the health benefits of cheese were found to be the greatest when it replaced a less healthful food like red or processed meats. So there's a big difference between crumbling some blue cheese over a salad and serving up a pepperoni pizza with double cheese. "Incorporating cheese into a Mediterranean-style diet where you also include fruits, veggies, whole grains and other foods known to lower disease risk is going to be the most beneficial to your overall health," Young said.

For those watching their sodium intake, cheese can be pretty salty. (The salt acts as a preservative.) If you're eating about an ounce a day, it's not a huge concern. Most types give you between 150 and 300 milligrams of sodium per ounce. (The daily value is no more than 2,300 mg.) Eat more, though, and the sodium can add up.

As per The Washington Post, the form cheese takes may also influence how it affects health. "Many of the studies on cheese and health use cheese in a nonmelted form," Feeney said, adding, "We still don't know how melting or cooking affects the health outcomes, for example, eating cheese on pizza or in cooked dishes like casseroles."