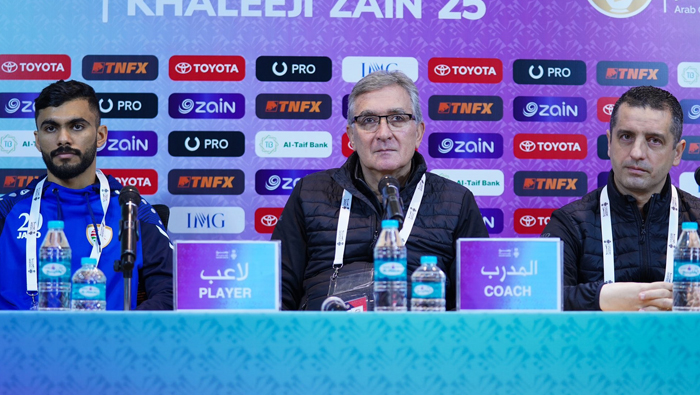 MUSCAT: Oman’s Red Warriors are a confident bunch ahead of their blockbuster semi-final clash against the defending champions Bahrain in the 25th Arabian Gulf Cup at the Al Minaa Olympic Stadium in Basra, Iraq, on Monday. The match kicks off at 9.15pm, Oman time.

Oman will be hoping to make it to their fifth final, having won twice and finished runners-up twice while Bahrain are the reigning champions and have been in the final on four other occasions.

Speaking ahead of the semi-final match, Oman coach, Branko Ivankovic of Croatia, said: “We know it is going to be a tough match against a solid Bahrain team, who are the defending champions. I am confident that my boys will give their best and our aim is to win.

“We are happy to be in the semi-finals. It was not an easy journey as the competition is tough and the matches we played in the group stage weren’t easy. We qualified as second best team in the group but we shared the same number of points as group topper, Iraq (seven).”

The Croatian coach said: “Bahrain are a stable team with good players. I think that small details matter a lot in such crucial games and I think those details need to be taken care of as they are important for a win. We will try our best and I trust my boys will put their best foot forward.”

Salah al Yahyaei, one of Oman’s key players, said: “It is great to play the semi-final of the Gulf Cup. We will do our best and work hard to qualify for the final.”

Oman have so far impressed in their march to the semi-finals. Oman, who tasted glory as recent as in the 2017-18 edition, have hardly put a foot wrong following their opening day draw with the hosts as wins over Yemen (3-2) and Saudi Arabia (2-1) took them into the last-four stage.

Bahrain have never previously lifted the Gulf Cup until their 2019 triumph, and are now two matches away from emerging back-to-back champions. The titleholders have been impressive thus far, topping Group B following wins over UAE (2-1) and Qatar (2-1) before being held 1-1 by Kuwait.

They showed resilience to come from behind to defeat Qatar and they will need more of that against Oman. Iraq will be a massive test for the three-time champions but with development the key focus, Qatar’s rising stars will not fear their opponents.