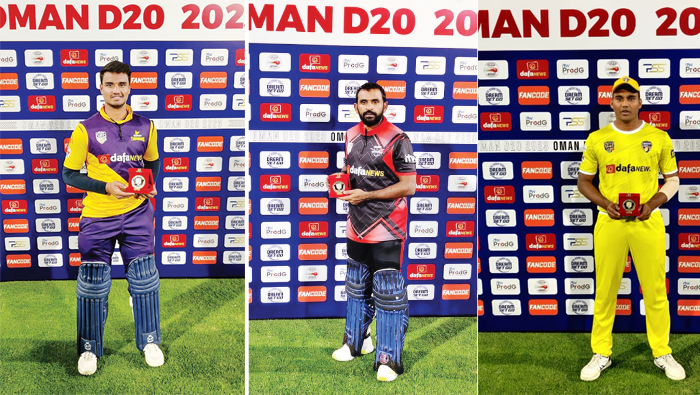 Muscat: Oman Cricket’s D20 that kicked off on 11 January experienced quality cricket and nail biting finishes to the initial leg of the league.

The matches are being played at the Oman Cricket Academy Grounds which offer free entry to all spectators. The league is currently underway with teams competing for the coveted title – final being on the 24th January 2023.

In response, Darsait Titans successfully chased the target with Ghazanfar blazing out with his 46 off 29 balls taking them over the line.

Ghubrah Giants couldn’t hold the attack of Bousher Busters’ bowlers tumbling down to just 66 runs with Nadeem Khan and Aqil Khan picking 3 wickets and Ahmed Fayyaz Butt claiming 2 wickets. In response, Bousher Busters chased down the target in the 9th over with Adeel Shafique scoring 40 off 30 balls making sure to take them over the line.

Batting first, Pratik Athawale’s (35 off 37) steady start helped Rafiullah (52 off 39) and Karan Sonavale (25 off 24) set a defendable total for the Royals. Qurum Thunders pacers were the key wreckers with Akash Mohit picking 3 wickets and Munis Ansari claiming 2 wickets. In response, Qurum Thunders got off to a good start by Aiyappa CR (29 off 27) creating a base for HashirDafedarscoring 53 off 38 balls including 4 sixes ably partnered by Ayaan Khan to take the thunders to their 1st victory in the tournament.

Zeeshan Siddiqui’s opening blitz scoring 32 of 22 balls set the tone for Khuwair Warriors with their middle order batsmen cashing in on the start with Arsalan Basheer (33 off 32) and Muhd Zeeshan (43 off 24) taking control of the game and making sure Khuwair Warriors set a defendable total.

Mohammed Nadeem was one among the bowlers picking 3 wickets. In response, Hannan Rizwan (43 off 32) started well for Ruwi Rangers continued by exemplary strokeplay from Mohammed Nadeem (50 off 39 n.o) and Mehran Khan (27 off 13 n.o) taking the rangers over the line in the last over.

Mohsin Qureshi and Asim Kamal picked 2 wickets each for the Khuwair Warriors.

The Oman D20 is set to roll out many more intense, action packed matches bring the best of talent in Oman under a lid. The matches are broadcast across the globe on Fancode, GeoSuper, WillowTV, CricTracker on Youtube and Sportseye on Facebook.