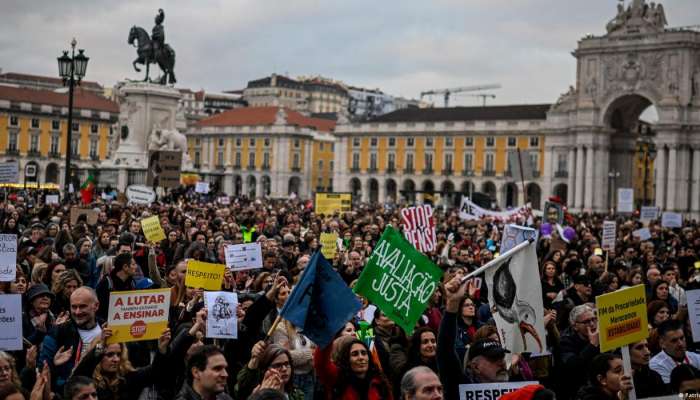 Lisbon: Tens of thousands of teachers and school staff marched on the streets of Lisbon demanding higher pay and better working conditions on Saturday.

According to police more than 20,000 people were at the march while the organizers — the Union of All Education Professionals (STOP) — said "more than 100,000" were present.

Some of the protesters wore black to mourn the state of the education sector, while others called for Education Minister Joao Costa to step down.

Why are the teachers protesting?
"Teachers deserve a fair salary because we've worked all our lives...we've never been corrupt and we've never stolen like the bad example that is unfortunately coming from politicians," history teacher Maria Duarte told Reuters news agency.

"We have to be respected," special needs teacher, Lucinda Lopes said. "They must give us what is rightfully ours and they can't take away the little we have."

The teachers were also opposing a change that would give institutions more authority and "decentralize" the hiring process.
Education minister denounces strikes

The demonstration on Saturday follows a string of partial strikes since the beginning of December, which forced the closure of many schools.

The organisers are planning more strikes from Monday, which will end with a national demonstration on February 11.

Taking a tough stance, Education Minister Joao Costa described the action as "atypical, disproportionate and radical in the middle of a negotiation process".

On Wednesday, the minister is scheduled to meet with the unions for new negotiations, but he has threatened to mandate minimal services to compel some teachers back to work.