Need to build again this confidence in myself: Rafael Nadal ahead of Australian Open 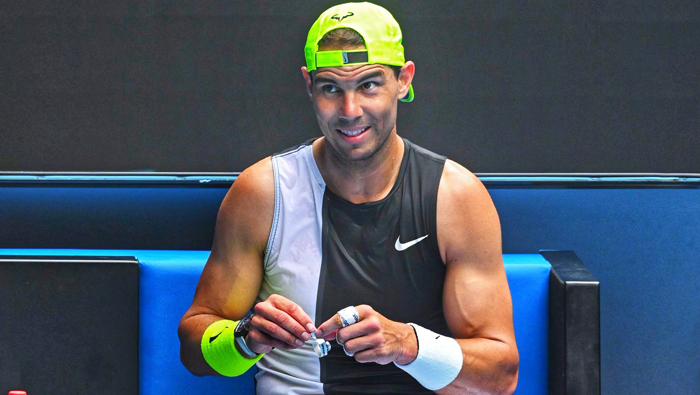 Melbourne : The 22-time Grand Slam champion Rafael Nadal has admitted that he is feeling vulnerable ahead of his first-round match in Australian Open and said that he needs to build confidence in himself.

The defending champion had lost six of his last seven matches since the US Open, which is the worst run of his career entering the Grand Slam. "Without a doubt. I have been losing more than usual, so that's part of the business," Atp.com quoted Rafael Nadal as saying.

A first-round matchup against 21-year-old Great Britain's Jack Draper who is just beginning his first full year on the ATP Tour would typically make Nadal the overwhelming favourite, but the fact that Draper is regarded as a difficult draw for the Spaniard, who is seeded first with Carlos Alcaraz out injured, is a testament to Draper's development.

Nadal offered no justification for his recent slump. The lowest-ranked player he lost to was then-World No. 31 Tommy Paul in the Rolex Paris Masters, but two of those defeats came at the Nitto ATP Finals.

"The real thing is I have been losing more than usual. Yeah, that's the truth. I need to live with it and just fight for the victories. By the way, I didn't play that bad the first two matches the year. I lost against two great opponents, but having very positive chances to win both matches. I already have been here for three weeks, practising every day with that conditions, with the best players. That helps a lot in general terms," Nadal said.

In comparison to when he first arrived in Australia, Nadal said he feels better about his game now. In his opening match of the year at the United Cup, Nadal fought hard against two elite players in Cameron Norrie and Alex de Minaur, going all the way to a third set.

"I'm going to keep working because in the end I think I am in an improvement moment that I have been better and better every single week. I feel faster in the legs. I feel playing better with more confidence. The past three weeks of preparation here have been very positive from my point of view. Then I'm going to go on court and I'm going to try my best," Nadal said.

"I still hope that I can play a good Australian Open. But you don't know what can happen. The first round going to be an important one against a very tough opponent," he further added.

"But I feel ready, honestly. The only thing that didn't happen in my side is victories. That's the real thing. But for the rest of the things that I am building to be ready for a tournament like this one, I feel quite ready," Nadal said.