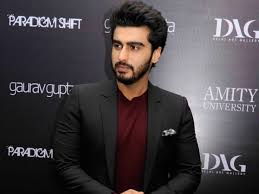 New Delhi: Actor Arjun Kapoor says dubbing for the character of Buck in the Hindi version of "Ice Age: Collision Course" was challenging for him.
The 31-year-old "Ki & Ka" star, who is making his voice-over debut with the popular animation franchise, said it was tough to catch all the emotions right just with the voice. "It's a new kind of performance you have only one tool to use and that is your voice and it is challenging to push yourself to see what you can achieve vocally. I did not know I could make so many voices and imitate so many people," Arjun told PTI.
The actor was surprised with his energy while dubbing for Buck, a weasel, who first appeared in 2009 film "Ice Age: Dawn of the Dinosaurs".
"All the characters in the film have certain space but he (Buck) is just all over the place as he is so energetic and I did not know I had that kind of energy to push myself and dub for him."
Arjun says India has the perfect audience for animated features, but feels Bollywood will still take time to meet up the standards of the West.
"Hollywood has cracked emotions very well with animation and that is where India will eventually cover because it is an emotional country and we just want a right story to tell which will stir the right emotions with the audience.
"Hopefully we will also have our own animated films soon that will be self-sufficient for our audiences but we are still few years away from dreaming that big," he said.
"Ice Age: Collision Course" will release on July 15. Apart from his voice-over debut, the actor is excited about his next venture "Half Girlfriend," based on author Chetan Bhagat's novel of the same name.
Arjun, who has been shooting in Delhi University for the movie, said he had a great time filming in the campus.
"It was nice shooting at Miranda House and St Stephens College and great to be able to walk those lawns and sit in those classrooms where lot of great people have graduated."
Directed by Mohit Suri, "Half Girlfriend" also stars Shraddha Kapoor.
Praising his co-star the actor said, "She is a disciplined young girl and it has been enjoyable working with her."