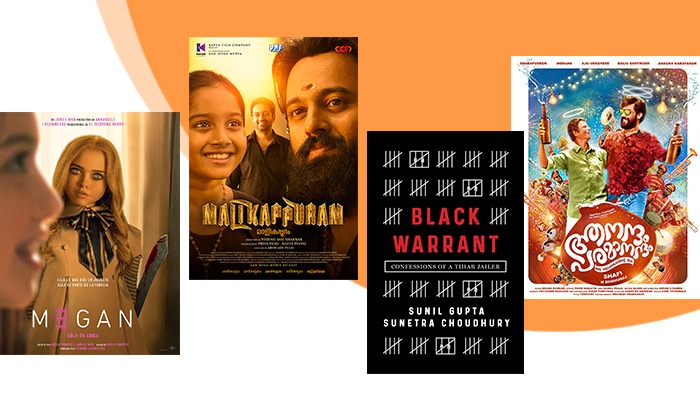 M3GAN is a marvel of artificial intelligence, a life-like doll programmed to be a child’s greatest companion and a parent’s greatest ally. Designed by brilliant toy-company roboticist Gemma (Get Out’s Allison Williams), M3GAN can listen and watch and learn as she becomes friend and teacher, playmate and protector, for the child she is bonded to. When Gemma suddenly becomes the caretaker of her orphaned 8-year-old niece, Cady (Violet McGraw, The Haunting of Hill House), Gemma’s unsure and unprepared to be a parent. Under intense pressure at work, Gemma decides to pair her M3GAN prototype with Cady in an attempt to resolve both problems—a decision that will have unimaginable consequences.

A semi-retired special ops assassin and a DEA agent cross paths on separate missions to stop a cyber terrorist organization that has built a dangerous machine threatening to attack the power grid and bring catastrophe to the world.

An intense desire of Kallu, an 8-year-old girl from Panchalimedu village to visit Sabarimala.

Anupama is trapped taking care of an alcoholic father and an unemployed husband. Father makes a masterplan & commits suicide, but the plan fails. The soul of her father will not rest in peace till his daughter's life prosper.