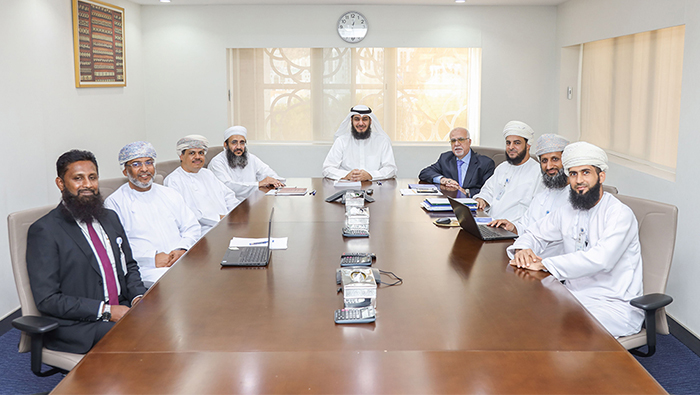 Muscat: Sheikh Dr Essam Al-Enezi, Chairman of the Sharia Supervisory Board at Alizz Islamic Bank, thanked the employees of the bank’s Internal Sharia Audit & Compliance Department for their efforts and roles in ensuring the bank's adherence to the controls and standards of Islamic Sharia in all banking transactions.

Islamic Sharia is the pillar on which banking products & services are based in Islamic banks, and the guidance of Sharia has created honest and transparent transactions that are compatible with the needs of society and customers. Islamic Banking is witnessing an increasing demand due to its compatibility with the Sharia regulatory requirements that give customers peace of mind and reassurance.

The fourth and final meeting of the Sharia Supervisory Board this year was chaired by Sheikh Dr Essam Al-Enezi, Chairman of the Board, in the presence of the members of the Board: Sheikh Dr Ahmed Subhi Al-Ayadi and Sheikh Dr Ibrahim bin Nasser Al-Sawafi, and the General Manager of the bank, Ali bin Saif Al-Mani.

During the meeting, Ali Al Mani presented a visual presentation in which he explained the local economic performance, the bank’s performance during the current year, and the expected growth and challenges in the upcoming period. The Sharia Audit & Compliance Department also presented the Sharia compliance and audit report, which included indicators of periodic review and assessment of potential risks. Additionally, the Sharia audit report for the fourth quarter of the current year was submitted, which reflected the Sharia audit of executed transactions. The Sharia Board provided appropriate solutions to any procedural observations.

In its meeting, the board also discussed a plan to launch new products during the upcoming year that meets the growing need of customers to receive innovative products that are compatible with Islamic Sharia, desiring to place a diverse suite of Islamic products and services in their hands. It also discussed the plans of the Sharia Audit & Compliance department for the year 2023.

Commenting on the meeting Issa Bin Salim Al Riyami, Head of Sharia Audit & Compliance said “Any achieved success comes as a result of the focused efforts of everyone in the Sharia Board. The past period witnessed comprehensive reviews of all banking transactions that Alizz Islamic Bank offers to its customers to ensure its commitment to that. In this regard, we have also provided a variety of training programmes and lectures to educate all employees of the bank. During these lectures and programmes, guidance was given on the essential differences between Islamic and conventional banks, the methods used in providing banking solutions that are compatible with Islamic Sharia and how they start and end, especially since Islamic banking is witnessing rapid growth since the start of its operations in Oman, which is confirmed by numbers and data in this regard.”

Al Riyami added, “The data issued by the Central Bank of Oman revealed an increase in the total assets of the Islamic banking sector to nearly OMR6.4 billion, i.e. 16.6 per cent of the total assets of the banking sector in Oman by the end of October 2022, recording growth at a rate of 9.6 per cent compared to the same period last year. As for the total financing balance granted by the units that carry out this activity, it recorded an increase of 10.7 per cent reaching more than OMR 5.3 billion, whereas deposits with Islamic banks and windows recorded an increase of 9.7 per cent, reaching about OMR 4.8 billion by the end of October 2022.”

Elaborating further he said, "The high numbers confirm consumer confidence in the Islamic banking sector and the quality of the products and services provided. This confirms beyond any doubt that the Islamic Banking sector, despite its recent introduction in the market, has become the first choice for most segments of society due to the flexibility and ease that it carries in its essence. Good beginnings lead to good results, and this sector has proven its ability in various financing transactions, whether through financing provided to individuals or large financing provided to companies. We are continuing with an unyielding determination to provide what is best for our valued customers. With the support we receive from the Sharia Supervisory Board and the benefits from its jurisprudential expertise, we have learned a lot about moving forward in strengthening the Islamic banking sector.”