International Year of Millets 2023 kicks off 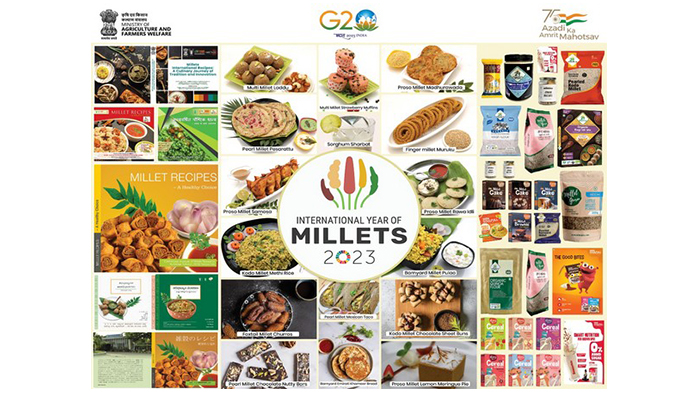 New Delhi: The International Year of Millets 2023 has officially kicked off.

January 2023 is the focussed month for the Ministry of Sports and Youth Affairs, and the States of Chhattisgarh, Mizoram, and Rajasthan for conducting events and activities related to the millets year.

India pushed for recognizing the importance of millet and creating a domestic and global demand along with providing nutritious food to the community.

An essential staple cereal crop for millions of smallholder dryland farmers across Sub-Saharan Africa and Asia, millets offer nutrition, resilience, income and livelihood for farmers, and have multiple uses such as food, feed, fodder, biofuels and brewing.

Significance and benefits of millets:
Millets are nutritionally superior to wheat and rice owing to their higher protein levels and a more balanced amino acid profile. Millets also contain various phytochemicals which exert therapeutic properties owing to their anti-inflammatory and anti-oxidative properties.
Further, besides being climate resilient, millet grains are rich sources of nutrients like carbohydrates, protein, dietary fibre, and good-quality fat; minerals like calcium, potassium, magnesium, iron, manganese, zinc and B complex vitamins.
Most importantly, millet production is not dependent on the use of chemical fertilizers.

Background of millets in India:
Millets were traditionally consumed, but due to the push given to food security through Green Revolution in the 1960s, millets were less consumed and almost forgotten.

Before the Green Revolution, millets made up around 40 per cent of all cultivated grains, which has dropped to around 20 per cent over the years.

Not only has the consumption of millets declined, but the area under production has been replaced with commercial crops, oilseeds, pulses, and maize. These commercial crops are profitable, and their production is supported by several policies through subsidised inputs, incentivised procurement, and inclusion in the Public Distribution System. This has resulted in changes in dietary patterns with preferential consumption of fine-calorie-rich cereals.

India produces more than 170 lakh tonnes of millet, which is 80 percent of Asia's and 20 percent of global production.
India produces all the nine commonly known millets and is the largest producer and fifth-largest exporter of millets in the world.8 Most of the states in India grow one or more millet crop species. Rajasthan, Uttar Pradesh, Haryana, Gujarat, Madhya Pradesh, Maharashtra, Karnataka, Tamil Nadu, Andhra Pradesh, and Telangana are the major millets producing states.

The major millet-importing countries in the world are Indonesia, Belgium, Japan, Germany, Mexico, Italy, the US, the UK, Brazil, and the Netherlands.