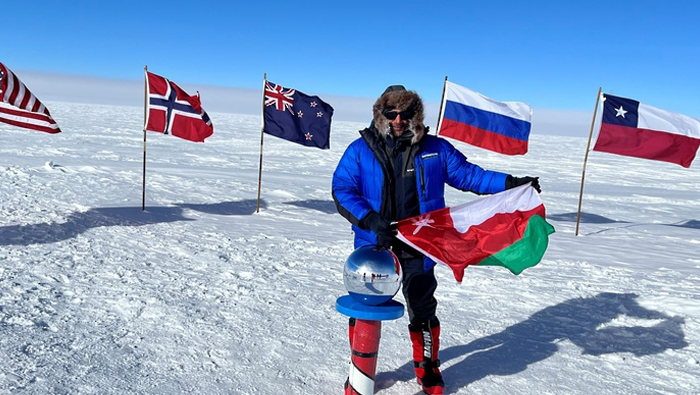 Muscat: An Omani adventurer managed to climb the highest peak in Antarctica, and became the first citizen to ascent the Seven Summits and Antarctica.

The Omani adventurer said: "The adventure began on the second of December 2022, when I was able to reach the southern frozen pole on December 16 after travelling a distance of 120 km skiing for eight days, and then completed the trip by going to the mountain camp ( Vinson) and climbed the mountain in stages, and on the 24th of December reached the summit of Mount (Vinson), the highest peak in Antarctica.

He added: "This adventure is part of the Grand Slam Explorer programme aimed at reaching Seven World Summits on every continent and the North and South Poles. This has been added to the series of achievements after representing the Sultanate of Oman in climbing the highest peak in the world, which is Everest, with a height of 8,849 metres. I reached Lhotse which is the fourth highest peak in the world, having a height of 8,516 metres, during the same trip, to be the first Omani, and the second Arab to reach both summits together in the same trip.

He explained that the trip was characterized by environmental and climatic conditions that are among the harshest natural factors on the face of the earth, and it is difficult to predict and ascertain their phenomena, and it is one of the most difficult challenges available to man to test their determination to go through the experience of skiing to the South Pole and climbing to the top of Mount (Vinson).