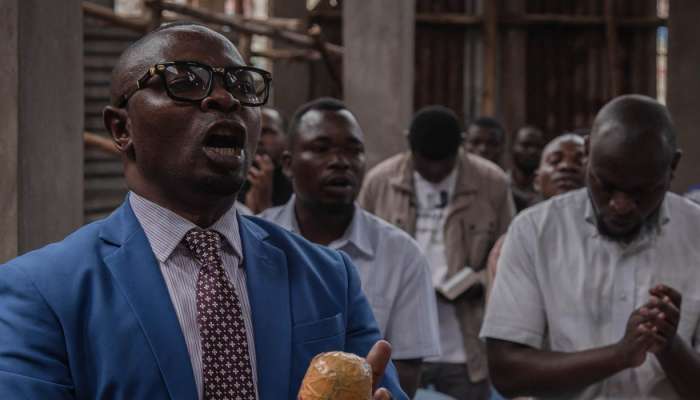 Accra: Emmanuel Donkor, a corporate worker in Ghana's capital, Accra, is always looking forward to the last day of the year to have an opportunity to join other Christians in  church to usher themselves into a New Year.

Church gatherings on December 31 evenings, called watch night services in Ghana, are very popular. That's when many Christians stay up at night to pray to end the year and begin a new one.

But in recent years, these watch night services have become fertile grounds for prophecies that predict doom and gloom.

Christianity is the largest religion in Ghana, with 71.3% of the country's population being members of various Christian denominations, according to the 2021 census.

'Anything can happen'
It's either one popular public figure who would die in the new year, a political party or politician who would win or lose the next election, or the world is about to be plunged into a major crisis.

"When the Holy Ghost spirit falls on you, you cannot control it. Anything can happen," Donkor told DW.

Prophesies by pastors who seek to give people a glimpse into the unknown are a big deal for people like Donkor.

Leonard Ackon, an African missionary based in the US, told DW that traditional December 31 watch night services are meant for Christians to gather to renew their faith and not for showmanship by so-called prophets.

"God does not only speak during the [December 31] all-night services. The watch night services are a very important moment for us to gather together as a people of faith to worship God and cross into the new year but doing so with a sense of vulnerability, humility and purpose," Ackon said.

Creating fear and panic
Besides the pastor who made the prophecy, Shatta Wale and his manager were also arrested for spreading misinformation the police deemed was meant to create fear and panic among Ghanaians.

To prevent the barrage of prophecies across these watch night services, the Ghana Police Service last year launched the "Prophecy Communication Compliance Day”.

It was a day the police set aside days before the year ends to caution churches against doomsday prophecies that border on the death of people and those that create fear and panic.

Bringing sanity to churches
The police action, for the first time, brought some level of sanity to the religious space and watch night services. Controversial prophecies of harm and death were hardly made by pastors.

In a statement, the police once again reminded people to "practice our faith within the confines of the law to ensure a safe, secure environment, free of anxiety generated from predictions of impending harm, danger, or death."

"As the year 2022 draws to a close, we wish to once again entreat the general public, especially faith-based groups to ensure continuous compliance with the law as it relates to the communication of prophecies," the police statement stressed.

Good directive
Fred Dzakpata, a Christian who resides in Accra, told DW how excited he was about the police's warning to churches.

"I believe it is a good directive because since a year ago, when this directive came into force, we have had some sanity in the country," he said. For him, such prophecies are deliberate by some pastors to take advantage of vulnerable people.

"Imagine you've toiled all your life and have achieved something greater and all of a sudden a quack prophet comes out to prophesy about you without any valid reason just raising some suspicion of fear about you which most often turns out not to be true" Dzakpata said.

He commended the police for intervening, but not everyone is happy. Donkor disagreed with what he said was an attempt by the police to gag preachers from speaking what he called "the mind of God."

"I don't think the police have the right to tell the pastors or the churches how to go about their prophecies," Donkor argued.

Pastor Brown supports the freedom of religion but concedes the police have some role to play in restoring order among preachers abusing their religious rights.

"Care must be taken so that the state [the police] in their bid to enforcing the law do not infringe on the rights of other people as well," Brown said.

Finding common ground
According to Brown, a fine balance is needed as he urged senior religious leaders to get involved in getting pastors found of giving out doomsday prophecies to tone down.

"We want to call on the senior ministers to call some of these younger ones who have that habit of getting to do these things to address them quietly. If it is a problem with the pulpit, it must be the pulpit to correct it," Brown said.

Brown also wants such doomsday prophets to be named and shamed publicly in the media for their actions to discourage others.

"Somebody prophesised that another person was going to win a particular contest and the person lost, and everybody was quiet. Things like that you should name and shame."