How To Use Misbaha in Oman 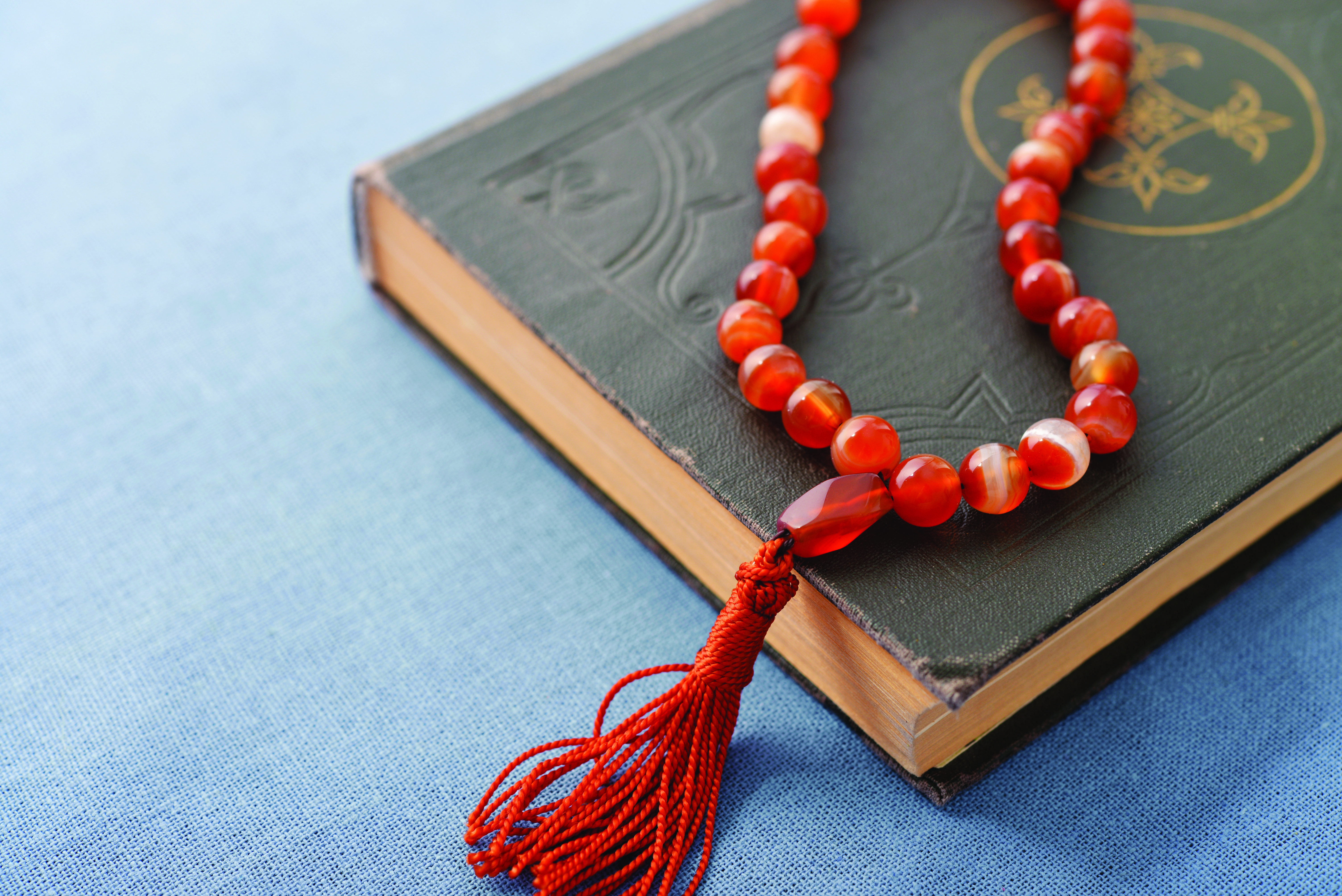 On a recent morning, I took my beloved mother to Muttrah Souq to buy some spices. As we walked towards the entrance of the souq, an antique shop stopped me in my tracks. The window was strung with a kaleidoscope of shiny, colourful, bejewelled prayer beads and as I gazed up at them, my mind drifted back to my late grandfather and to his golden misbaha.
*
With countless things in common, beginning with our name, Salim, my grandpa and I had an unshakable relationship full of love and curiosity. The curiosity was mostly mine, and it was at times unquenchable. Miraculously, his patience in answering me seemed to be limitless.

When I was just a boy, we would take long walks to the mosque for Maghreb prayers each evening, and with every slow, leisurely step we would delve deeper into the discussion of the night, most often about Islam.
On one such night, I noticed a chic gentleman in a black embroidered mussar murmuring quietly to himself, grasping a long thread of beads, which he would move one at a time with his thumb. I gazed up at him, fascinated.

“Didn’t I tell you it’s impolite to stare at people?” my grandpa whispered to me.
I quickly glanced away, but I was too curious to let it go, so after a few minutes, I looked up at my grandfather and asked him what that man had been holding in his hand.
“That Salim, is a misbaha,” he answered, an amused smile playing on his lips.
“What exactly is a misbaha?” I pushed.
He put his hand into his right pocket and removed a thread of golden coloured plastic beads. “This is a misbaha, it’s used by Muslims around the world to praise and glorify Allah after prayers. It’s made of either 99 beads, or it can be like this one in my hand, which has 33 beads,” he explained.
“Beads?” I replied, having never heard the term before.
He pointed at the little orbs. “These small rounded pieces are called beads, and they represent the 99 names of Allah,” he said, handing the misbaha to me as he spoke. “It’s a tool made for Muslims to keep track of what they are reciting, so I like to call it a memory aid.”
My curiosity was far from satisfied. “Allah has 99 names, but you only have 33 beads, so how do you use it,” I asked.
“I use it in three cycles, which makes for 99 total,” he said, his gate quickening as we neared the mosque.

We did our ablution and sat just behind the Imam, and I watched as my grandpa removed his golden misbaha and started to speak softly, just like the man I’d spotted along our way. I scooted over even closer to him to try and hear the words he was saying, but his voice was so hushed and breathy that I couldn’t make out the words, and he was so focused that for a few minutes, he seemed to be somewhere else.

My curiosity was reaching a fever pitch, and I couldn’t stop thinking about what he must be saying, and how much I loved the clacking sound of the beads as they were rhythmically moved down the string. I kept thinking about it throughout the prayer and once the Imam finished his Dua’a, I grasped my grandpa’s hand and pulled him closer.
“I saw you speaking softly to the misbaha, just like the guy outside,” I whispered.
He smiled slightly. “I was glorifying God, thanking him for all his gifts of health and prosperity. Gratitude is a powerful thing to recite,” he said quietly.

On our way back home, grandpa started telling me a story about a prophet (PBUH) who was swallowed whole by a whale, but my thoughts remained with the fascinating beads. While he was describing the incredible life of that prophet (PBUH), I looked up and asked him to lend me his misbaha. Without loosing the rhythm of his story, he reached down into his dishdasha pocket and absent-mindedly handed me the threaded beads. I wrapped it around my wrist, like I’d seen other men around the mosque do.

“Why do you carry it to the mosque, why not recite at home?” I blurted out, unintentionally interrupting his story.
“Well, the misbaha is a sacred tool for Muslims... it works as a spiritual protection for the person holding it and reminds us to remember Allah,” he said, slowing his pace.
“If it is sacred, then why do people carry it everywhere, sometimes to the souq or even weddings?” I asked.
“Because some people believe that holding a shiny long misbaha made of precious materials is a sign of wealth, a luxury of some sort. But the original purpose was to help guide us towards Allah and his grace,” he answered, holding open the door for me.

The house was filled with the aroma of my grandma’s sweet-smelling chicken stew, which erased all other thoughts from my mind. I hurried to go wash my hands and find my place at the dining table.

When dinner was finished, my mind returned again to the mysterious beads as I sat impatiently waiting for Al Isha prayers.

When my grandfather and I started off for the mosque for Isha prayers, excitement seemed to fill the night air and I felt goosebumps run up my arms.
“Would you like me to tell you a story about Noah and his arc?” he asked me as we walked towards the glow of the masjid.
“Tell me more about the uses of misbaha,” I eagerly replied.
“You really adore those beads, don’t you Salim,” he said with a little laugh.
“Mm-hmmm. I want to know why people are using it all the time and how they use it and why,” I said excitedly.
“Well, alright. See, when we’re using it we can relax our busy minds and shut all the other noises out, making it easier to become filled with tranquillity and peacefulness. The act of tasbeeh, a form of praise, in and of itself does wonders for the human soul,” he replied.
“How?” I asked.
“It defies misery and brings happiness; it banishes Satan and gratifies the Lord; it works as a miraculous healer; and, of course, the best of all; it can help us earn forgiveness from Allah.”

The way he spoke about this simple string of beads in that moment made me fall in love with the misbaha, which, to my young mind, became a talisman with superpowers.

Before we reached the mosque, I stopped and grabbed my grandpa’s dishdasha. “Can you teach me please?” I asked him.
“I’d be more than happy to, Salim, but now we have to hurry up before the Imam calls for prayers,” he replied.

After finishing prayers, I grabbed a strand of green plastic misbaha that were kept at the mosque and sat next to grandpa, waiting for his tasbeeh prayer lesson. He sat down slowly and pulled out his golden beads.
“First, you have to be focused. Are you focused, Salim?” he asked. “Yes,” I nodded.
“Both our misbaha have 33 beads, which means we will do three rounds. First we will begin by glorifying Allah by saying “Subhan Allah”. On our second round we send praise to Him by saying “Alhamdullilah”, and finally we will acknowledge his greatness and say, “Allahu Akbar,” okay?” he said, before grasping his beads and starting to pray quietly and clearly.

As we prepared to start our walk home, he took his golden misbaha out of his pocket and looked at them, before turning his gaze to me.
“Salim, this is your weapon,” he said, holding up the beads. “Use it after every prayer, or whenever you feel sad, aggravated, or at fault, and I promise you that Allah will hear your prayers.”

I stood facing the glimmering antique shop, holding back unexpected tears. I asked my mother to wait for me for a moment and I entered the shop, returning with a couple of new misbahas. Later that evening I hung them on the rear view mirror of my car alongside my grandpa’s golden set, which I touched fondly. Those worn golden beads have proved to have their own magic — they keep his spirit close to me, or at least I’d like to think so. —[email protected]

‘Misbaha’ and Where To Buy Them
As my grandpa said, misbaha are a powerful tool Muslims use to perform tasbeeh, which is a sacred practice of prayer and supplication to help overcome obstacles and to bring about peace in one’s heart. Misbahas come in a variety of forms, designs, and colours and they are made with materials from different parts of the world. There’s plastic from china, crystals and stones from India, red coral from Iran, marble-shaped beads from Pakistan, and the popular amber from Yemen, Russia, and Germany. You can find vintage ones made of wood from Sudan, which are the original wood-scented beads.