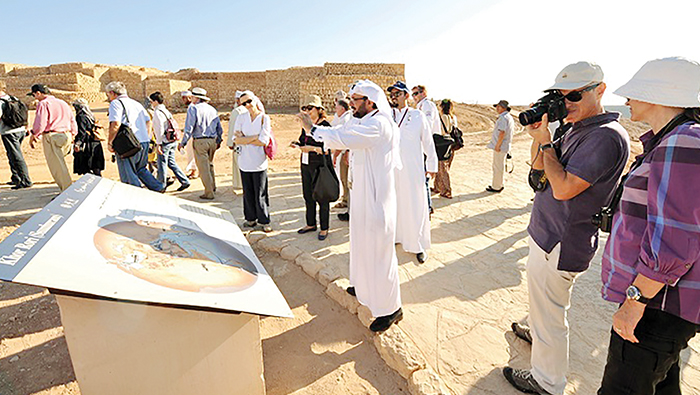 Muscat: Many tourist attractions, including traditional markets, castles, forts and archaeological sites are found in various governorates of the Sultanate of Oman.

The arrival of foreign tourists, which is called ‘winter tourism’, begins in October and ends at the end of April.

A number of tourists from different nationalities, including European, American and Asian, have stressed the status of the Sultanate of Oman as an important tourism destination, noting that the castles, forts, popular markets and Omani customs have a different character from the rest of the neighboring countries.

Muhannad Abed Rabbo of Jordan said: “This is my first visit to the Sultanate of Oman, where I visited many sites in the Governorate of Muscat , in which I was attracted that they combine ancient architecture with modernity.”

He added: “Through my visit to the Muttrah Market, which was developed and currently preserves its beautiful traditional building, tells the heritage of an ancient and contemporary country. Though I have visited many markets in the Arabian Gulf region, Muttrah Market has a different character.  Pointing out that what caught his attention in the market are Omani heritage, ornaments, and perfumes that are manufactured using local Omani methods, stressing that these traditional industries have a special character, especially the Omani perfume, incense, and frankincense industry that spreads throughout the market.

Kevin from the United States of America said: “This is my second visit to the Sultanate of Oman, and what made me visit it is the calm and safety that the Sultanate enjoys, and the Omani hospitality has a great role in attracting the attention of tourists from different countries of the world.”

He added: “My previous visit was in 2017 to Al Dakhiliyah Governorate, where I visited Al Jabal Al Akhdar, which is characterised by cold weather in the winter season and is distinguished by antiquities, old houses and methods of building them. During my trip , I got acquainted with working on the terraces and how to irrigate them using the old traditional methods. I also visited Misfat al-Abriyyin in the Wilayat of Al-Hamra, where I was drawn to the beautiful scenery and the mud buildings that are distinguished by a different engineering system.”

For her part, Conley, a German national, confirmed that this is her second visit to the Sultanate of Oman, and that it is a beautiful country that deserves to be visited many times, and respect and good treatment to visitors always make them feel safe and reassured.”

She pointed out that among the aspects that encourage tourists to visit the Sultanate of Oman are several components, like ancient tourism and heritage diversity, and the beautiful popular markets in the various governorates of the Sultanate of Oman, which are unique compared to the rest of the neighboring countries.

For his part, Sai Bavan from India indicated that this is his first visit to the Sultanate of Oman, as it is a beautiful and hospitable country. I have visited many places in the Sultanate of Oman including the Omani castles, forts and customs which have a different character, and during my visit to the Nizwa market the ancient design attracted me.

The Nizwa traditional market has a long history and it has shops that were built in a beautiful way, and Omanis work in them, especially the youth, explaining that these stores offer many products, especially local ones such as traditional daggers and swords, and Omani sweets that have a special flavor .

He added: “I have also visited the Sharqiyah Sands, which is visited by a large number of tourists due to the presence of camps that tell about Bedouin life, and the tourist adventures in the desert have a beautiful and distinctive character, which attracts many tourists to these beautiful golden sands.”