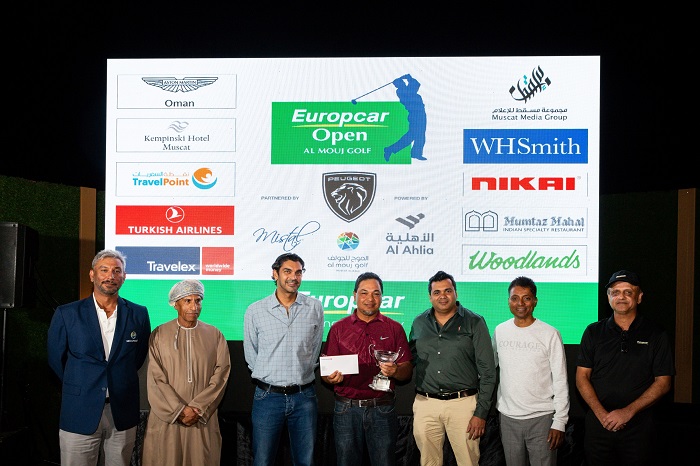 Muscat: The 2022 event of Europcar Open at Al Mouj Golf was partnered by Peugeot and Aston Martin, Mistal Watches and was jointly powered by Al Ahlia Insurance and Turkish Airlines. Travelex the Foreign Exchange partner, Travelpoint the travel partner, Kempinski the hotel partner, Nikai the electronics partner, WHSmith the retail partner, African & Eastern the beverage partner and Muscat Media Group, the media partner. The tournament was also supported by Mumtaz Mahal and Woodlands.

Over 150 players participated in the event and there was a huge waiting list to get in. The gala evening dinner and prize distribution was a full house. The format was individual stableford and Inter-Club Championship between five golf clubs including Al Mouj, Ras Al Hamra, Ghala, Sifah & Dubai Hills, vying for the title. The Division A Men’s Stableford winner was Mohamad Nasaruddin who won two business class tickets to anywhere in Europe sponsored by Turkish Airlines and a luxury sports watch from Mistal. Division A men’s gross winner was Navaid Ahmed who won a luxury sports watch from Mistal and one round of golf in Dubai Hills and luxury SUV rental from Europcar. Women’s winner was Jameela Daud who won a luxury fashion jewellery set from Mistal and a weekend at Kempinski Hotel. The Inter-Club championship winner was Al Mouj Golf Club represented by Girish Chawla (Men’s Captain – Al Mouj Golf), Jameela Daud, Emma Merritt and Glenn Canterford and each winner received a gift hamper from WH Smith and dinner vouchers from Mumtaz Mahal.

The event was attended by Rishi Khimji, Managing Director of Asha Enterprises LLC, Mundhir Al Barwani, Chairman of the Oman Golf Association and a number of high profile guests.

“It is almost overwhelming to see how far we have come. This is our eighth year hosting the Europcar Open and we are excited to announce the ninth edition on December 8, 2023. In addition, Europcar Oman will also host the Europcar Open Golf Event in Bahrain in 2023 for which dates will be announced soon. "The Europcar Open effortlessly blends the elements of business with pleasure, bringing to the golfers an experience to remember. The event serves as a great networking platform between fellow golf enthusiasts,” said Nitin Sapre, GM of Europcar Oman and Bahrain.