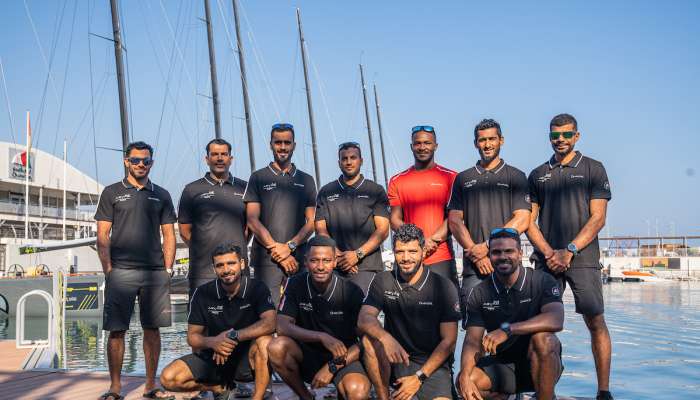 Dr. Ibrahim Al Nadhairi, CEO of Asyad Shipping and Asyad Drydock, said, “It is our pleasure to be the official supporter of Oman Sail’s professional sailors participating in the 44th International Cup on board of Asyad Shipping’s boat and we wish them success and raise the flag of the Sultanate of Oman high”.

Al Nadhairi added that Asyad Group and Oman Sail share a common goal: to connect the world with the Sultanate of Oman through the sea, whether through shipping services or competing in major international sailing championships. It is a great honour for Muscat to host the grand final of this year’s RC44 Tour, and to bring so many excellent teams to our shores to race.

Hashim Al Rashdi, Oman Sail’s Head of Performance, said, “This is an exciting opportunity for our sailors to gain more experience at the very highest levels of sailing. The RC44 Cup has historically featured some of the world’s best sailors, competing on identical boats which means skill and tactical awareness is the deciding factor. We are grateful to Asyad Shipping, the shipping arm of Asyad Group for supporting the team and the entire team is looking forward to being part of such a prestigious international event on home waters.”

This is the first time that the RC44 Tour has visited Oman since 2014 when Oman also hosted the final round. The championship has already been decided, with Monaco-based Charisma, skippered by Dutchman Nico Poons, bringing an unassailable lead into the final round of races following three successive wins, but there is still a lot to race for over the weekend at Al Mouj Muscat. The fleet is congested behind the leaders and all of the teams will be looking to finish the season strongly, while the addition of Team Asyad Shipping offers incentive for the local team to perform to the best of their ability.