US sees 'momentum' in EU talks amid tensions over subsidies 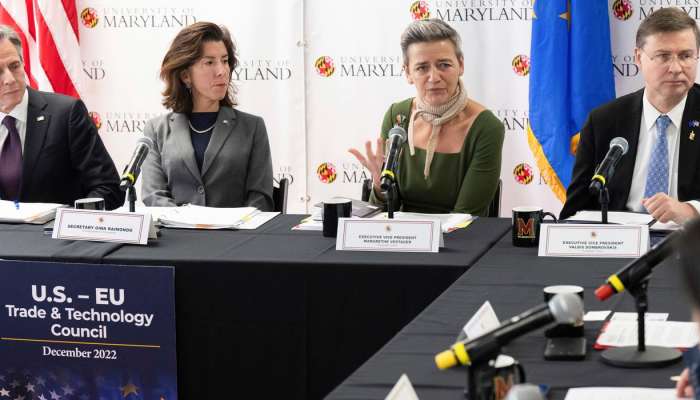 The European Union and the United States on Monday said they would intensify talks to tackle Brussels' fears over planned US subsidies.

Washington's Inflation Reduction Act (IRA) has triggered concerns in the EU that it may disadvantage European firms.

The plan tackling climate change and inflation includes around $370 billion (€352 billion) in subsidies and generous tax breaks for purchasing US-made products. Only countries that have a free trade deal with the US, like Canada and Mexico, will be able to benefit from the subsidies.

"We acknowledge the EU's concerns and underline our commitment to address them constructively,'' the two sides said in a joint statement after meeting at the University of Maryland.

The statement added that the talks resulted in "preliminary progress," and the EU's trade commissioner Valdis Dombrovskis said his delegation left the meeting "slightly more optimistic than we were entering [it]."

What did the US say?


US Secretary of State Antony Blinken, who co-chaired the meeting, said Washington set up a task force to deal with the EU's concerns as soon as it became aware of them.

"Today, I think we advanced that discussion,'' said Blinken.

"Coming out of these conversations and feeding into the work of the task force, I'm convinced that we're continuing to give momentum to that conversation and to working through the differences," he said.

Blinken later wrote on Twitter that the US and the EU "can create good paying jobs and tackle the climate crisis — and not at each other’s expense."

What does the EU want?


EU Trade Commissioner Dombrovskis, in an interview with DW, acknowledged that the Inflation Reduction Act "was not meant to discriminate against the EU and close allies."

But he advocated for the EU receiving "the same treatment as Canada and Mexico already are receiving," which were not subjected to "discriminatory provisions of the Inflation Reduction Act."

Dombrovskis said reconciliation regarding the US law is needed, as trans-Atlantic trade relations could be impacted.

On Sunday, European Commission President Ursula von der Leyen said the bloc must "adjust" its own rules to facilitate investment while preventing "distortions" that could be caused by such a law.