Government says over 270 dead from attack in Congo 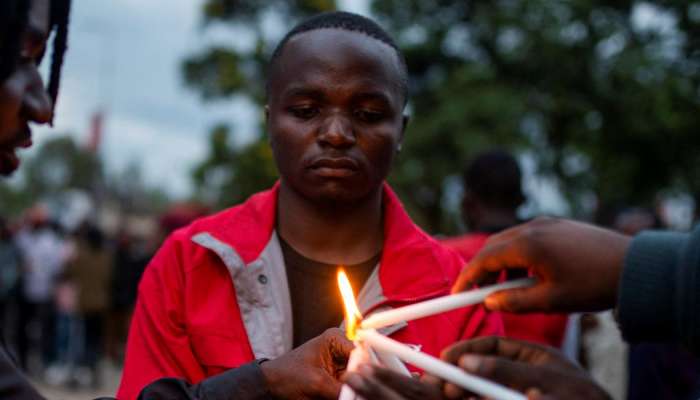 Democratic Republic of Congo's government increased the death toll from a massacre last week in the eastern village of Kishishe to at least 272, officials announced on Monday.

Previously, the deaths were estimated at 50 in the attack that took place in the province of North Kivu and has been blamed on the M23 rebel group.

What did the government say?


In a media briefing, Industry Minister Julien Paluku said those killed were "people known to be regular inhabitants of Kishishe." The victims had no connection with militia groups, he added.

Government spokesman Patrick Muyaya said a probe into the attack was underway.

"I cannot give details of the attack. An investigation has been opened by the attorney general and we are awaiting the results of the investigators," he said.

"What we do know is that children were killed in an Adventist church and a hospital," Muyaya added.

The conflict between the army and M23 forces has escalated since October.

The violence on November 29 came just five days after a fragile cease-fire agreement was agreed upon between the rebels and Congolese forces.

The M23 — a militia comprised of mostly ethnic Tutsi fighters from Congo — has denied responsibility for the attack.

How did M23 leaders respond?

M23 accused officials of creating a smokescreen to divert attention from other atrocities in the region that he has blamed on government soldiers and their allies.

The group's chairman, Bertrand Bisimwa, said Congo's government made "false allegations" against M23 "with the dual objective, firstly concealing the setbacks suffered by its coalition in the Kishishe area and secondly, to divert one's attention on ongoing genocide committed by its coalition."

He said the government made those accusations against the rebel group "without any due diligence or investigation."

The M23 chairman claimed that the number of deaths had been inflated by a tribal militia leader and that only eight people had died from stray bullets during the clashes last Tuesday.


A group of United Nations experts said earlier this year that it had "solid evidence" of Rwandan troops fighting alongside the M23 and providing it with weapons and support, which Rwanda denied.

The leaders of Congo and Rwanda have met several times in a bid to find solutions to the crisis.

Their most recent meeting was in Luanda, where the cease-fire was agreed on.

However, the fighting has reportedly continued since.

The UN's peacekeeping mission in Congo has led calls for a probe into the massacre.

Representatives for the United States and the European Union have said that the killings were potential war crimes.