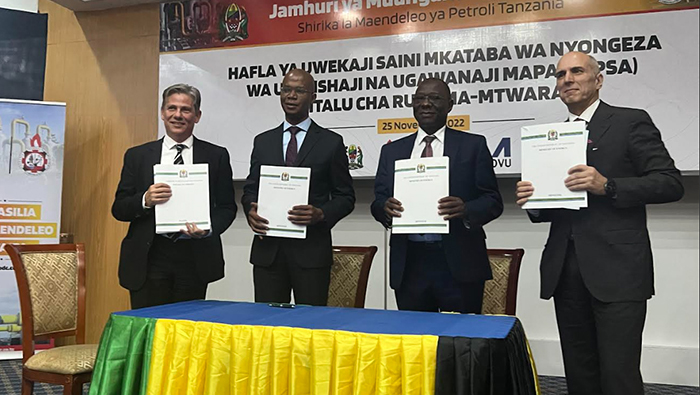 Muscat: ARA Petroleum Tanzania Limited (APT) one of the group companies of The Zubair Corporation, has signed an Addendum to the Ruvuma Block Production Sharing Agreement (PSA) to now provide for natural gas.

APT is a subsidiary of The Zubair Corporation of Oman and holds majority shares in the Ruvuma Block in Tanzania as well as being the operator for the block.

The PSA was initially signed in 2005 for oil exploration in the Mtwara Licence. A significant gas discovery was made in the Ntorya location in wells drilled earlier. APT was established in 2018 to accelerate the development of the Ntorya area. The exploration activities picked up momentum in 2021 with APT acquiring working interest from Ndovu Resources Ltd. and becoming the operator of the project.

During the signing ceremony held in Dar es Salam, Energy Minister January Makamba said that the two countries, Tanzania and the Sultanate of Oman are connected by historical ties and that the signing of these agreements further enhances these ties. He added that with this agreement, the Government of Tanzania is ending 12 years of silence and this move provides confidence to investors that oil and gas exploration in Tanzania has started again.

Sultan Al Ghaithi, The CEO of ARA Petroleum has commented, “Tanzania along with the rest of East Africa has tremendous demand for energy and we are excited to be a part of this compelling growth story in the region.”

This agreement becomes especially important as Tanzania’s dependence on gas-fired electricity plants has been increasing as prolonged drought reduces water levels in rivers and reservoirs causing a reduction in hydropower generation.
APT estimates 1.6 Tcf gas resources lie in the Ntorya Field and have recently conducted a 338 km2 3-D Seismic Acquisition as a part of the continuing exploration campaign in the block.