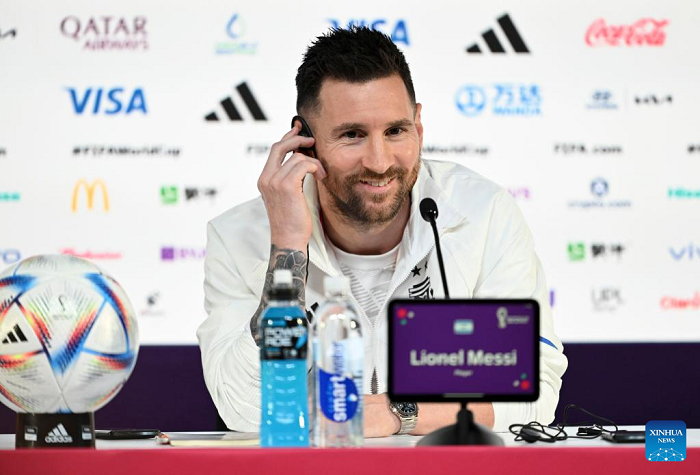 Lusail :  Following the shocking defeat against Saudi Arabia, the Seven-time Ballon d'Or winner Lionel Messi admitted that he did not expect his team Argentina to start the FIFA World Cup in this fashion.

Saudi Arabia stunned two-time champions Argentina 2-1 in a group C FIFA World Cup tie played here at the Lusail stadium. "It's a situation that this group of players has never been through, it's been a while since we suffered such a tough blow, we didn't expect to start like this," Messi was quoted as saying by Skysports.

"In five minutes of mistakes that we made, we went 2-1 down and then it was really tough and we lost organisation and started punting the ball," he said.

The 35-year-old said that his team needed to put the defeat behind them and that fans must not lose him just yet.

"We knew they were a team who would play if we let them. They did not surprise us, we knew they could do that. Obviously we have to win or win now. It's up to us to fix what we did wrong and get back to the basics of who we are. We're OK, obviously hurt by the result, very bitter. But people must trust that this team will not let them down and we are going to go for it in the next two games. We've played games of this nature before and we're going to perform well. Now's the time to be more united than ever, to show how truly strong we are," said the Argentina star.

Coming to the match, Argentina got off to a great start as Lionel Messi converted a penalty in the 10th minute to give his side a 1-0 lead. Playing in his fifth World Cup Messi beat Saudi Arabia's goalkeeper Mohammed Al-Owais to find the net.

The Argentines also had three goals ruled out for offside as they went into half-time with a 1-0 lead.

The second half was a different story altogether as 51st-ranked team Saudi Arabia came with a new vigour with Saleh Al-Shehri scoring a goal for them to level the score 1-1. Al-Shehri squeezed in a low shot into the nets.

Five minutes later the Saudis took the lead as Salem Al-Dawsari tapped in a goal in the 53rd minute to give them a crucial 2-1 lead.

Despite a lot of possession after conceding the goal, the two-time champions were unable to level the score. Saudi's goalkeeper Mohammed Al-Owais made many important saves and their defence also stood tall in the match's dying moments.

Abdulelah Al Amri was awarded the 'Player of the Match' award for his brilliant performance.

Lionel Scaloni's Argentina came into the FIFA World Cup 2022 as one of the favourites. Saudi Arabia broke Argentina's 36-match unbeaten streak, including winning the Copa America 2021.

The Argentines will face Mexico on Saturday in their next group C match, while Saudi Arabia will take on Poland