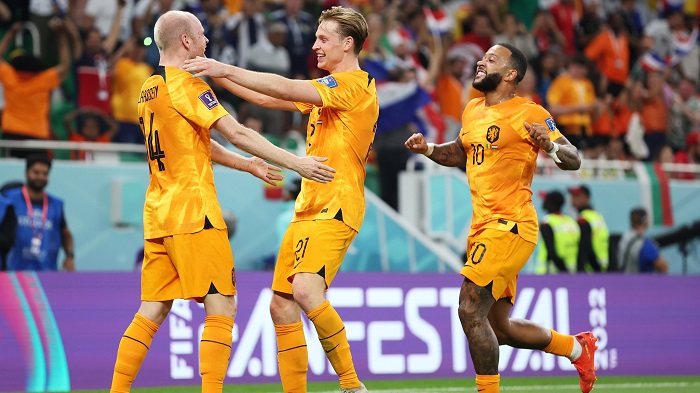 Doha: Late goals from Cody Gakpo and Davy Klaassen guided a spirited Netherlands to 2-0 victory over Senegal in the Group A match here at Al Thumama Stadium.

The contest with tight and the two teams were unable to score for most part of the match. The teams made several moves but each time the ball missed the goal or was put out. The breakthrough came for Netherlands in the 84th minute through strike by Cody Gakpo.

The Dutch were playing their first World Cup match since 2014, failing to qualify for the tournament's previous edition in Russia in 2018.

The Netherlands had an opportunity to take the lead in the sixth minute as Cody Gakpo passed the ball to teammate Steven Bergwijn whose attempt was blocked.

Dutch midfielder Frenkie de Jong failed to capitalize on another chance in the 18th minute.

The Netherlands failed to convert their chances into the goal and the first half ended in a deadlock. While the Dutch team seemed to have an edge in the first half, it looked to have lost some steam in the second half.

Cody Gakpo's goal was also a result of poor goalkeeping by Eduard Mendy as he went out to punch the ball and completely missed it. Gakpo's header was on target as the Netherlands opened their account.

In the stoppage time, Memphis Depay's shot forced Edouard Mendy to parry to Davy Klaassen, who provided a comfortable tap-in to make it 2-0 for Netherlands.

The Dutch are on top of Group A with Ecuador, who scored a 2-0 win over Qatar in the tournament's opening match on Sunday.