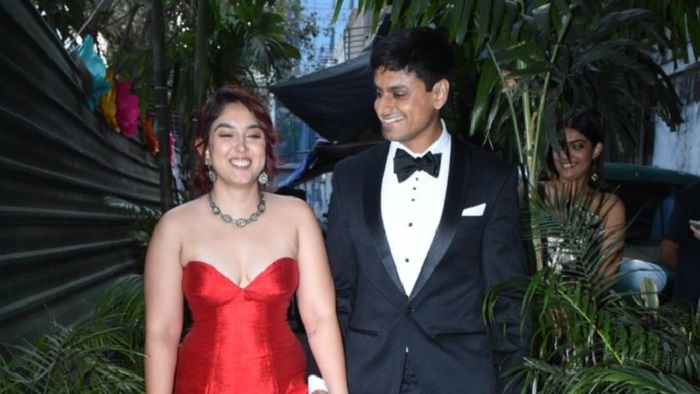 In the picture, Aamir looked dapper as he wore an embroidered white kurta with a matching dhoti. But what caught our attention was his salt-pepper hair that enhanced his look.

Aamir posed with her mother Zeenat Hussain, who recently suffered a heart attack.

Aamir shares daughter Ira with his ex-wife Reena Dutta. Aamir and Kiran got married on December 28, 2005. They welcomed their first son, Azad, through surrogacy in 2011. Aamir was earlier married to Reena Dutta but separated in 2002. He has a daughter Ira and a son Junaid from his first marriage with Reena.

Apart from Aamir, his nephew Imran Khan was the talk of the function.

As Imran Khan made a rare public appearance at his cousin Ira's engagement.

Meanwhile, Aamir was last seen in Laal Singh Chaddha alongside Kareena Kapoor Khan. The film didn't manage to impress the audience. The film landed into a lot of controversies during its release.

Recently, Aamir has decided to take a break from acting.

Aamir appeared at an event in Delhi, where he talked about his career and revealed he is stepping back from acting for a year and a half.

Several videos and pictures from the event went viral. In one of the clips, Aamir disclosed that he was supposed to do a film called Champions. However, now he wouldn't be acting in the film but would be involved in its making.

"When I am doing a film as an actor, I get so lost in that that nothing else happens in my life. I was supposed to do a film after Laal Singh Chaddha called Champions. It's a wonderful script, a beautiful story, and it's a very heartwarming and lovely film. But I feel that I want to take a break, be with my family, with my mom, my kids."

Aamir emphasized that this is perhaps the first break he is taking from acting in his 35-year-career.

"I feel I have been working for 35 years and I have single-mindedly been focused on my work. I feel that it's not fair to people who are close to me. This is the time I feel I have to take some time off to be with them, and actually experience life in a different way. I am looking forward to the next year, year-and-a-half in which I am not working as an actor," he added.

Aamir's revelation about taking a break from acting comes months after his film 'Laal Singh Chaddha' failed at the box office.