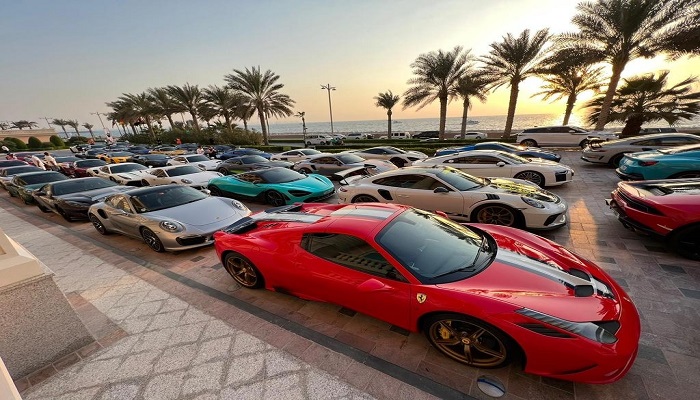 Muscat: The Sultanate of Oman will host the Gumball 3000 International Motor Show from November 13 to 15, with the participation of a group of the world's most prominent sports cars, including personalities in the fields of sports, music and business.

The march will enter Oman from Al Buraimi Governorate, coming from Al Ain in the United Arab Emirates, passing through the governorates of Al Dhahirah and Al Dakhiliyah, and reaching the Wilayat of Jabal Al Akhdar, where the participants will spend the first day.

On the third day, the "Gumbal 3000" march will start from the Wilayat of Mirbat, through the coastal road Hasik - Shuwaymiyah, to the Wilayat of Duqm.

Hisham bin Juma Al Sinani, Director General of Sports Welfare and Development at the Ministry of Culture, Sports and Youth, said: Receiving this tourism sports path is among the Ministry’s priorities in encouraging international competitive events, events and tournaments.

He added: "Jumbal 3000" is one of the international tourism and entertainment events that enjoys wide follow-up and great public interest by fans of competitive and exhibition motorsports. The youth have worked on completing the coordination procedures to hold the event in partnership with a number of authorities, including the Ministry of Information, the Ministry of Heritage and Culture, the Royal Oman Police and the Oman Automobile Association, noting that the paths that the participants will pass have been selected to highlight the most important landmarks and areas of tourist attraction.

Haitham bin Mohammed Al Ghassani, Director General of Tourism Promotion at the Ministry of Heritage and Tourism, said: Oman is rich in natural landmarks such as the coasts extending from Dhofar in the south to Musandam in the north, and the deserts and the eastern and western Hajar Mountains. There are ancient Omani villages, caves, hot springs and wadis, in addition to modern infrastructure.

Al Ghassani added: “We are pleased that the organisers of Jumbal 3000 chose to cross a route that offers a variety of prominent tourist attractions such as Jabal Al Akhdar, Salalah and Muscat in the current round of this prestigious event, in which a selection of well-known international personalities are participating.”