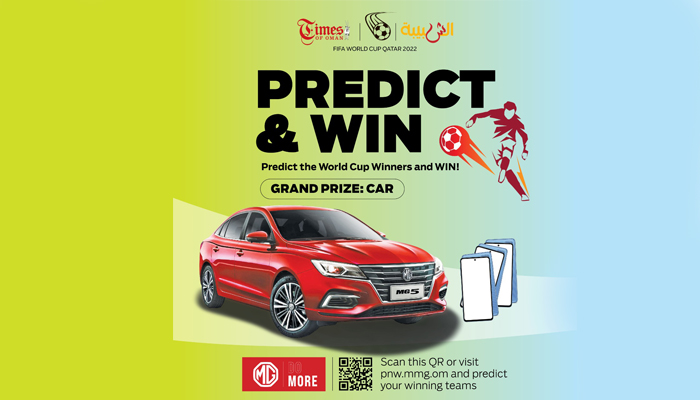 Muscat: Here is a golden chance for Times of Oman/Al Shabiba readers to win attractive prizes as Muscat Media Group (MMG) brings for you an interesting competition called Predict and Win for the FIFA World Cup Qatar 2022.

To participate in this contest all one needs to do is to make some smart guesses for the World Cup and predict who will lead the groups, what will be the group positions at the end of Round 1, who will be the winners of Quarter Finals, Semi Finals and Finals. The rules of the contest are simple.

First log in to the site pnw.mmg.om with email id and password. Guess the ranking order of teams in each group and also guess the winners of the quarter-finals, semi-finals and finals. Make sure that you make selections in all the fields. Once you are done click submit.

Participants with the most number of accurate guesses, based on submission dates will be automatically included in the draw. Only participants with valid email id and mobile number will be considered for the draw. The competition is open for only the residents of Oman.

Points will be given on how accurate the guesses are. The participants with the highest points will be selected for the lucky draw. Winners will be announced after the World Cup finals. The staff and relatives of Muscat Media Group and its subsidiaries are strictly excluded from participating in the competition. For more information log in to pnw.mmg.om.