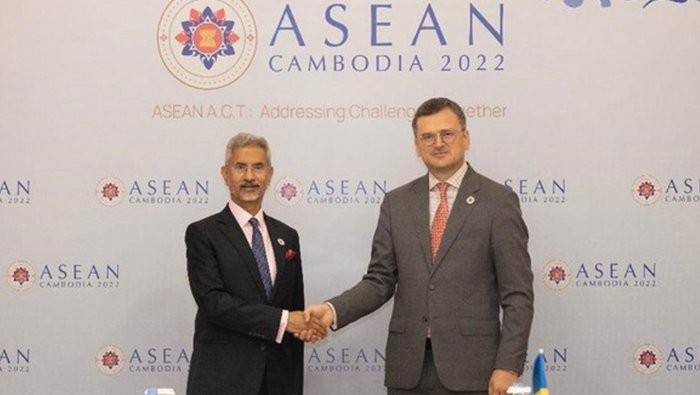 Phnom Penh: External Affairs Minister S Jaishankar on Saturday met his counterparts on the sidelines of the 19th ASEAN-India Summit, including Ukrainian Foreign Minister Dmytro Kuleba and discussed the grain initiative and nuclear concerns amid the Russia-Ukraine war.

"Pleasure to meet FM @DmytroKuleba of Ukraine. Our discussions covered recent developments in the conflict, the grain initiative and nuclear concerns," tweeted Jaishankar. Notably, Russia had declared that it was putting its involvement in the deal on hold, however, Russian President Vladimir Putin later stated that Moscow would suspend, but not end, its involvement in the deal.

The deal provides for a safe humanitarian corridor for the export of Ukrainian grains through the Black Sea, to tackle rising food prices due to the geopolitical conflict grappling the 'breadbasket.'

Meanwhile, Putin ramped up the nuclear rhetoric this fall, raising the spectre that he could use such a weapon in Ukraine.

"Great to see my friend FM Vivian Balakrishnan of Singapore. Always nice to exchange notes," tweeted Jaishankar. "Good to catch up with my dear colleague FM Retno Marsudi of Indonesia. Wish her all the best for the upcoming G20 Bali Summit," added Jaishankar.

The External Affairs Minister is accompanying Vice President Jagdeep Dhankar who arrived in Cambodia on Friday to participate in the ASEAN India Commemorative Summit and the 17th East Asia Summit.

This Summit is being hosted by Cambodia under the theme A.C.T (Addressing, Challenging, Together). This theme is aiming to counter regional issues, seeking prosperity, growth and stability among the states, in accordance with the main theme of ASEAN. Cambodia has played an important role in India-ASEAN engagements, the 1st India-ASEAN Summit took place in 2002 during the first chairship of Cambodia.