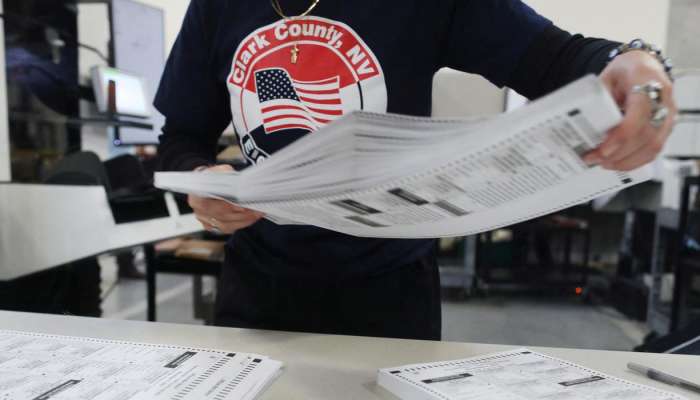 Washington: Republicans didn't get the "red wave” they were hoping for, but they don't need one. The party is on track to lap up the handful of seats required to take back control of the next House of Representatives in the United States Congress.

The balance of power in the Senate comes down to three states — Arizona and Nevada, as well as Georgia, which will be decided in a runoff in December. Democrats need to win at least two to maintain their current 50-50 hold — two independent senators align with Democrats. In this case, only Vice President Kamala Harris' constitutional role as the tie-breaking vote keeps them in charge of the upper house of Congress.

National elections are a local affair. Counties are chiefly responsible for running them, and states regulate and certify them. That means thousands of elections take place on Election Day, across multiple time zones, for dozens of local, state and federal offices, referendums, and ballot initiatives.

Rules and procedures vary — as do budgets, training and personnel for election offices.

"They're very resource deprived," Joshua Sellers, an associate law professor at Arizona State University, told DW. "We think of elections as these discrete moments. But they require months, if not years, of planning in advance."

However frustrating, a decentralized and redundant count can be a bulwark against the kind of fraud that former President Donald Trump and his election-denying allies have tried to push, without evidence, since Trump himself lost — and refused to concede — in 2020.

Many of those more extremist candidates lost on Tuesday, and conceded to their opponents. There are others, including at the state level across the country, who did win, putting them in a position to potentially influence future elections and call legitimate results into question.

"My hope is that whatever nefarious actions they might be inclined to take will be countered by all of the good, honest, public servants who work in these positions and work in these offices," Sellers, who is researching US election integrity as a fellow at the American Academy in Berlin, said.

Divided government: Check or gridlock?
The midterm shift, which will not take effect until the new year, looks to be small, but potentially decisive. If the Senate stays in Democrats' hands, they can keep control of committees and the legislative agenda, including shuffling through President Joe Biden's executive and judicial appointments. However, they will remain far short of the two-thirds vote that many kinds of Senate bills require to pass.

It's the House, however, that would see real change — and threaten to freeze Biden's legislative wishlist and policy priorities. Republicans there could block Democratic initiatives and push through their own, which would likely stall in the Senate, or Biden could veto them.

"When the country is divided as we very much are, I do think the world is right to be concerned about our ability, as a global unit, to address some of these problems," Sellers said, referring to transnational issues such as climate change and pandemics like COVID-19.

Republicans in the House can also deny Biden funding, and tie up his administration in hearings and investigations. They have the power to impeach, which is a political — not a legal — procedure that can derail a president's remaining time in office regardless of its outcome.
Global implications

Concerns about US democracy and the country's ability to govern itself have global implications, foreign policy observers say, and draw a starker link between public dissatisfaction at home and policy objectives abroad.

"We have to treat the American public and our representatives as absolutely having a legitimate role to play in foreign policy, and not making it sound like you have to be inducted into this expert priesthood to have a legitimate opinion," Stephen Wertheim, a senior fellow at the Carnegie Endowment for International Peace, a Washington-based think tank, told DW.

The apparent outcome of the midterms has dampened some democratic doubts, but not done away with them entirely. Still, there is bipartisan sentiment for a number of top geopolitical issues. Both sides have shown agreement on supporting Ukraine, countering China, and promoting domestic manufacturing of hi-tech products, such as microchips.

The differences may appear not in what gets done in these areas, but how.

"I don't think Ukraine is a very polarised or political issue yet in the American political scene," Michael Kimmage, a history professor at Catholic University in Washington, D.C., told DW. "There has to be concern that if Republicans take the House, for example, it's not that they'll cease supporting Ukraine, but they'll start attaching all kinds of other things to appropriation bills and assistance bills for Ukraine."

Ukraine, and its leadership, has experience as fodder for US partisanship. Trump's first impeachment centered on the former US president allegedly pressuring the Ukrainian president, Volodymyr Zelenskyy, to help malign Joe Biden and his son, Hunter, in exchange for US support.

"Even a small shift in the nature of US support to Ukraine could have pretty big reverberations for the Ukrainian military," Kimmage, who worked on the Russia/Ukraine desk in the Obama-era State Department, added.

Similar shifts could happen in other foreign policy areas that may force Biden to make tough choices. The administration's critics view its National Security Strategy
, which was released in October, as one that "pretends that the US can have it all," Kimmage said.

While polling suggests
that public support for Ukraine against Russia, and similarly Taiwan against China, remains high across the board, they land more strongly in the Democratic camp. Trump-style Republicans express an isolationist bent, and the party campaigned to tackle record inflation and shore up an anxious economy.

"There is a popular sentiment in the United States that says we need nation-building at home," Wertheim, the Carnegie fellow, said. "It's what Obama said repeatedly. It's what Donald Trump ran on as well."

Republicans with more legislative power could "give more voice to those kinds of questions," he added.
Looking to Asia, relying on Europe

Still, with China fears taking hold on both sides of the aisle, any drastic pullback from the world stage or cuts in record high military spending, in absolute numbers, are unlikely.

"I do fear that one thing that a Republican Congress will mean is a kind of bidding war between the two parties to out-hawk each other on China," he said. "US domestic politics is a factor that's fueling strategic competition with China. That doesn't necessarily make for sound strategy."

The US has been trying to "pivot" to Asia since Barack Obama was in office, and the National Security Strategy has China foremost in mind. It suggests that the US can only refocus its considerable resources if its European allies take on more responsibility for their own security. Otherwise, the US risks ceding the Atlantic in exchange for the Indo-Pacific, or overstretching its capabilities to stay fully engaged in both.

That makes US national security priorities more dependent on NATO's — and, more broadly, the European Union's — commitments to burden-sharing. The buzz word, which is shorthand for beefing up European countries' own militaries, has been an issue for years. Both Democrats and Republicans have reasons to push allies to do so.

Add Trump to the mix — whose worldview suffered a setback in the midterms, but as a figure remains a potent and unpredictable force — and Europeans, in particular, have reason to watch US politics closely in the leadup to the 2024 presidential elections.

"It is a good time for Europe to think about how self sufficient it is and wants to be when it comes to its defense," Wertheim said. "I don't know how many more warning signs from the United States are necessary to convey this message."