England and Pakistan look forward to bag their second title 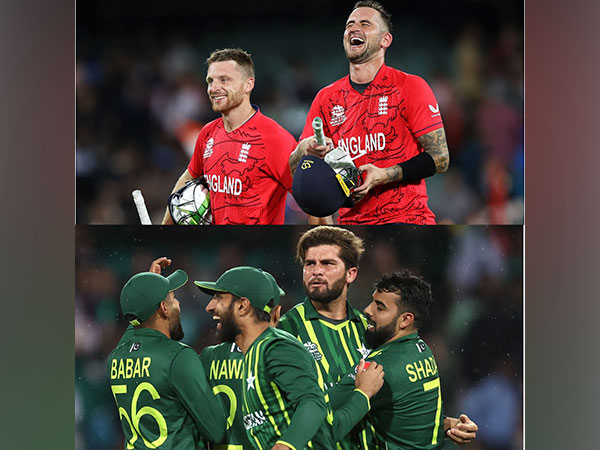 Melbourne : In the summit clash of the ongoing T20 World Cup, England will lock horns with Pakistan on Sunday and both teams will look forward to capturing their second title.

England will take on Pakistan in the final of the ICC Men's T20 World Cup at the iconic Melbourne Cricket Ground (MCG) in Melbourne on Sunday. The Three Lions first win their T20 WC in 2010 defeating Ashes rivals Australia in the final by 7 wickets in West Indies while Pakistan bagged their maiden title in 2009 when they beat Sri Lanka by 8-wicket in England.

Last-ball defeats to India and Zimbabwe seemed to have finished Pakistan's hopes before their T20 WC run had even really gotten going. And zero points from two games left them needing something approaching a miracle to make it through to the final four.

Pakistan opener Babar Azam and Mohammad Rizwan have to score heavily for the Asian side to win, but the reality is that the two experienced openers are supremely important to the result. Babar and Rizwan pulled up their ninth-century partnership in the format for the opening wicket against New Zealand in the semi-finals, and they will be eager to build on that momentum against England's underappreciated bowling lineup.

For Pakistan to have a chance of lifting the World Cup, they must get off to a quick and safe start because it will be much simpler for shot-makers like Mohammad Haris, Iftikhar Ahmed, and Shadab Khan to enter the game, play their natural shots, and attack the slower bowlers.

With a total of 10 wickets from seven matches, Shaheen Afridi has been Pakistan's most productive pacer so far in Australia. Now it's time for fellow quicks Haris Rauf and Naseem Shah to step up and help their pace spearhead.

Pakistan's success in the games after suffering defeats in their opening encounters with India and Zimbabwe is largely dependent on the starts given by their new ball attack. Among all the teams that have played in this T20 World Cup, Pakistan have the second-finest Powerplay economy rate (6.19) and an average of (18.58).

Talking about the team, England are in great form which helped them evidently dismiss India in the semi-final. They completely batted the Asian giants out of contention to knock them out of the competition, and will now look forward to carrying on their blistering form against Pakistan as well.

The English bowling unit has exceeded expectations in this tournament, but they fall short of Pakistan's bowling attack's calibre and menace. Therefore, they must attempt to rule Pakistan with their greatest asset, their batting. England should try to take on the Pakistani bowlers only after they have finished their new ball period because their batting order runs deep to number 10.

In this tournament, England hasn't been able to apply pressure on their opponents with the new ball. They haven't been able to take as many wickets as they would have liked because of their third-worst Powerplay bowling average and strike rate (37.67 and 30 respectively) among all teams competing in this T20 World Cup.