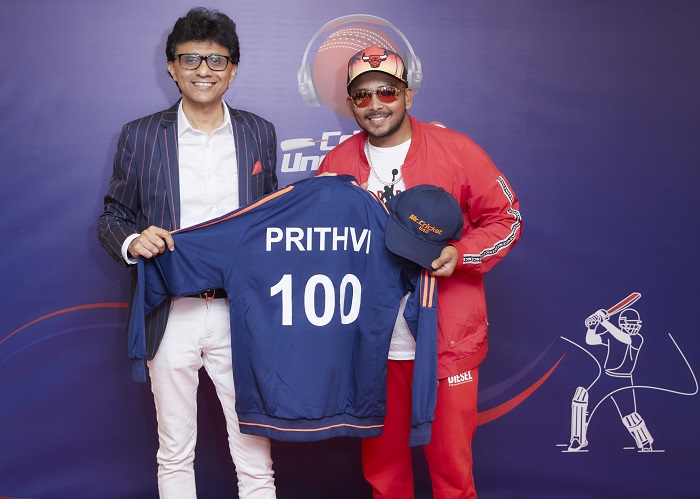 In an up-close interview with pocket Dynamo Prithvi Shaw who was at Danube office, who had the privilege to lift the Under 19 World cup and score a debut test hundred, Prithvi who turns 23 spoke his heart out speaking about his journey till now.

Prithvi said he had worked so hard to play for India wearing with pride the Indian jersey as he had seen his heroes like Sachin Tendulkar and Virat Kohli on TV and he himself donning the same Indian jersey and singing the national anthem of India gave him goosebumps and he said that moment can’t be expressed in words. And to top it winning the under 19 world cup under his captaincy was cherry on the cake. And when asked about making his debut the same year and sharing dressing room with legends like Virat Kohli, Ajinkya Rahane and Ashwin, he was initially scared but was confident of his abilities to perform. And scoring a whirlwind hundred in his very first innings against the likes of Shannon Gabriel, Keemo Paul and Devendro Bishoo was special which made him win the man of the match award. He felt supported by the Indian senior management and felt his nerves were eased. In fact, Prithvi Shaw at scored 546 in a Harris shield game at the age of 14 and then become the youngest to score a hundred in the Duleep Trophy and also a score a match winning hundred in Ranjhi trophy for Mumbai in its first season. He had come up the hard way and had the appetite to score big runs be it red ball cricket and white ball cricket.

And soon he was selected by the franchise Delhi Capitals which was earlier called as Delhi Daredevils and has done consistently well for the franchise scoring 1548 in five seasons at a strike rate of almost 150 was remarkable which made Ricky Ponting the head coach of the franchise calling him as a special talent.

As much as I have seen Prithvi Shaw he has the fearless approach when batting and taking the bowlers on similar to what Virendra Sehwag did during his prime time. His shots are breathtaking and likes dominating the bowlers and set the platform for his team without fearing he would get out. He missed a hundred against KKR scoring 99 but since the target was big he went for his shot as for him winning the match was more important than reaching to the milestone of a hundred. And even though he has not got more opportunities to play for team India, he has been scoring heavily in domestic cricket when he scored 827 runs in the Vijay Hazare trophy scoring five hundred but did not get the selectors nod to play for last year’s world cup in UAE.

When I asked him does he feel disappointed not being part of team India in the ongoing world cup he said he always wants to be playing for team India and will keep working hard and get more and more runs to get call back from the selectors. He added that in everyone’s career that graph does not always go up, its up and down and he will take it as a challenge and work more hard and he is almost there and will try his best.

He is the ‘X’ factor player who can take the game away from the opposition and Prithvi Shaw is one player who can maximize the power play in the shortest format which is now very important in the modern game where teams need a powerful start with the bat. When I asked him whom should India play in the semifinals against England between Dinesh Kartik and Rishab Pant, he was of the opinion that both should be played as both are match winners but the final decision lies in the hands of coach Rahul Dravid and Captain Rohit Sharma. He backed India to beat England and hopes of an India Pakistan final and India winning the World Cup. On Virat Kohli he said he said his mindset is phenomenal and mentally he is very strong and that’s why he has won so many games for team India and all this has come about he puts in the hard yards in the practice. He is confident of his game and that’s why he could pull of that game against Pakistan from a hopeless position.

Prithvi Shaw believes Yuzvendra Chahal like all leg spinners are match winners and hopes he might be picked in the semifinals against England. Today Prithvi turns 23 and its time selectors take a notice of this special talent who is a special talent and given a long rope as he has got the talent and the temperament to go the distance.