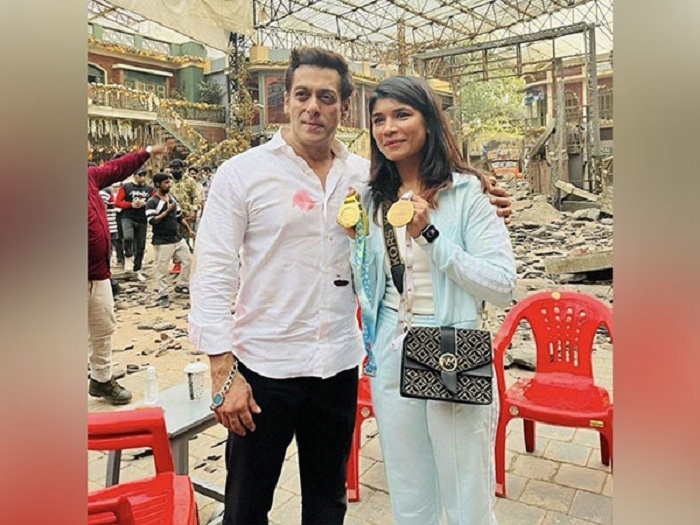 Mumbai :  Salman Khan dances to one of the iconic songs 'Saathiya Tune Kya Kiya', from his movie 'Love' with Indian boxer Nikhat Zareen, who claims to be his fan.

Nikhat took to her Instagram handle on Tuesday and shared a video featuring Salman along with a caption.

The video is shot on the sets of Salman's next 'Kisi Ka Bhai Kisi Ki Jaan'.

As soon as the video was posted, boxer's post was flooded with comments.

Wrestler Sangram Singh wrote, "Haha so cute. God bless both of you."

She captured the country's third consecutive boxing gold medal by defeating Carly MC Naul of Northern Ireland in the final of women's 50kg (Light Flyweight) at the Commonwealth Games 2022 that held in Birmingham.

Meanwhile, Salman on the work front is busy shooting his upcoming movie 'Kisi Ka Bhai Kisi Ki Jaan'. The film is an action-packed entertainer directed by Farhad Samji and features Salman Khan, Pooja Hegde, and Venkatesh in the lead with a Vast Pan Indian Ensemble cast which will be announced soon. It is produced by Salman Khan Films and promises to have all the elements that one expects of a Salman Khan Film - Action, Comedy, Drama, Romance and Emotions.

The film is now slated to hit the theatres on the occasion of Eid 2023. Previously 'Kisi Ka Bhai Kisi Ki Jaan' was speculated to release in 2022 end.

Recently, the 'Sultan' actor also announced the new release date of his next action thriller film 'Tiger 3' which was previously scheduled to hit the theatres on April 23, 2023, and will now be releasing on the occasion of Diwali 2023.

With this, the 'Tubelight' actor has now already booked two big festivals for the release of his next two biggies, which is definitely not less than a treat for all his fans.

Meanwhile, Salman will be also seen in 'Kick 2' alongside Jacqueline Fernandez.