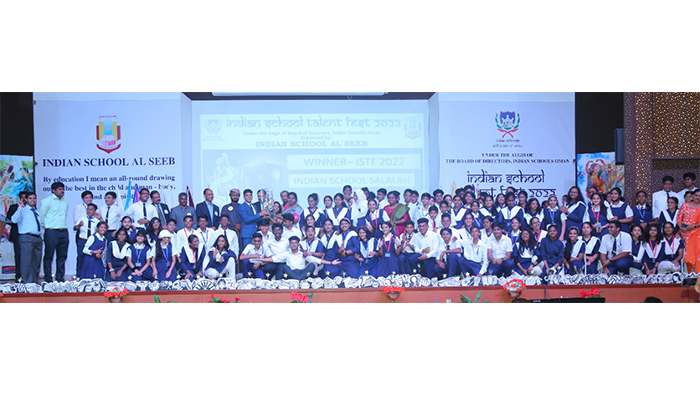 Muscat: Indian School Salalah was the proud winners of the fourth edition of Indian Schools Talent Fest (ISTF 2022), a mega cultural extravaganza organised by Indian School Al Seeb under the aegis of the Board of Directors, Indian Schools Oman on 28th and 29th October 2022.

The event was instrumental in bringing together nearly 2000 students from 21 Indian Schools across the Sultanate who matched their talents in music, art, dance, literature and theatre with the best of their counterparts.

Indian School Salalah, the champions of ISTF 2022, was thrilled to lift the Trophy and dedicated their victory to the hard work and commitment of each and everyone in the team. Indian School Al Seeb was declared the Runner-up of the event.

Dr. Sivakumar Manickam, Chairman, Board of Directors, Indian Schools Oman presided over the inaugural function. “Indian School Talent Fest is a great platform for collaborative learning – the innovative and creative events which are included will pose a challenging opportunity for our students to test their learning skills, literacy skills and life skills. Moving out from the conventional practices, all events are designed to enhance collaboration rather than competition,” Dr. Manickam said.

President of the School Management Committee Mr. R. Ranjith Kumar expressed the significance of ISTF for the all-round development of students. He said the School was privileged to host the event this year as it is celebrating 20th anniversary of its existence.

The flag bearers representing each school arrayed themselves on the stage and the ISTF flag was unfurled by the Chief Guest signifying the formal inauguration of the mega event. The ISTF mascot was Ai-Da, the world’s first ultra-realistic artist robot. The appearance of Ai-Da on stage was received well with a thunderous applause.
The two-day Talent Fest was concluded with a colourful valedictory function held on 29th October 2022 which was graced by Mr. Mohammed Salim Al-Abri, Senior Studies and Follow-up Specialist, Directorate General of Education, Batinah South Governorate as the Chief Guest.

The valedictory function was presided over by Syed Salman, Vice Chairman, Board of Directors, Indian Schools Oman. The programme was graced by Gajesh Kumar Dhariwal, Director in Charge of Indian School Al Seeb, Vinoba M.P., Senior Principal and Education Advisor, President R. Ranjith Kumar and other esteemed members of the School Management Committee, Principals, teachers and the most enthusiastic participants of the Talent Fest.

“The best strategy to teach students personality-related abilities is to motivate them to take part in cultural events such as music, dancing, and other activities. They help students build confidence and better understand their culture,” said Vice Chairman Syed Salman who presided over the valedictory function.

Dr. Leena Francis, Principal of Indian School Al Seeb, presented an overview of the two-day event. The Principal underscored the creativity, diversity and ingenuity of the events that made ISTF 2022 a unique programme for the holistic development of the students.

The cultural event and the selected performances from the unique talents of students enthralled the audience.

he programme came to an end when the Host School Principal Dr. Leena Francis handed over the ISTF flag to Syed Salman, Vice Chairman of the Indian School Board.

The songs presented by the School Choir and the cultural programmes put up by the students of Indian School Al Seeb for the inaugural and valedictory functions captivated the audience.

The organising team of ISTF 2022 consisting of Mrs. Dhanya Sunil as the main coordinator and a team of dedicated and committed staff of Indian School Al Seeb under the able guidance of the Management Committee and  Principal Dr. Leena Francis was appreciated for their tireless efforts to make the event a memorable one for all the participating students.