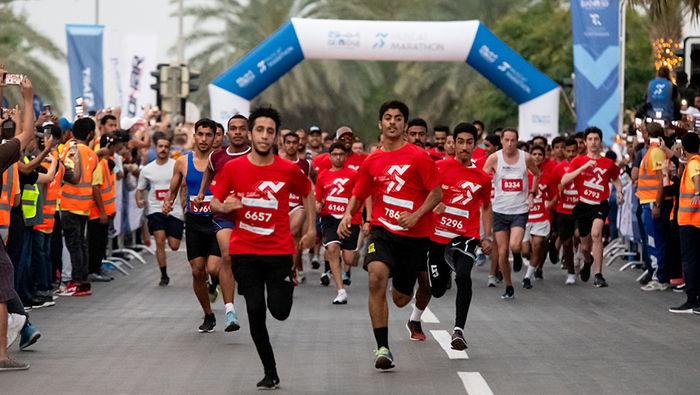 Muscat: The tenth edition of the Al Mouj Muscat Marathon is set to break new records as final touches are being given to ensure the smooth success of one of the biggest domestic sporting events in the Sultanate of Oman.

The marathon that started in 2012 with just 135 competitors has grown not only just in numbers but also in stature as it has become one of the most-sought events with runners not only coming from the region but also from Africa and Europe.

Following a break of a year due to COVID-19 pandemic, this year’s edition will feature a record number of 12,000 runners at the marathon that will be held on November 11-12.

At the last edition in February 2020, nearly 10,000 runners took part and the growing popularity of the marathon can be measured by the fact that it has registered more than 2,000 runners for the upcoming races that would include seven disciplines –marathon (42.2km), half-marathon (21.1), 10km, 5km, and three distances for children over 3km, 2km and 1km.

The marathon, half marathon and 10 km will be held on February 11 (Friday) while the remaining races will be held the next day.

According to event managers, Sabco Sports, who are receiving full support from Oman Sail, the previous organisers, over 12,000 runners represent 99 different nationalities.

Football legend Ali Al Habsi and popular broadcaster Ibtihal Al Zadjali have been named the official ambassadors of this edition.

Sabco Sports said that the event has been completely sold out and the upcoming weekend is set to be a celebration of the community, of dedication and a fun display for the whole family at Al Mouj Muscat.

The vibrant and ever-growing lifestyle destination, Al Mouj Muscat, pledged its support for the sixth time as title sponsor, based on a commitment to further contributing to tourism and sport tourism in the Sultanate of Oman, providing an avenue for SMEs to stimulate their income and showcase their products and services to a wider audience, as well as complementing the promise of vibrant lifestyle to residents.

It may be mentioned that Oman Sail had organised the annual Al Mouj Muscat Marathon from 2017 to 2020 while Muscat Road Runners had launched the marathon in 2012.

Over the years, the event has seen a steady increase in the number of participants making Muscat Marathon one of the most anticipated events of Muscat’s sporting calendar.

This year the race will be held in collaboration with the #RunInspired campaign which aims to address the rising numbers of people in Oman with diabetes, obesity and hypertension and encourage people across the nation to adopt a healthier and more active lifestyle.

Among the elite runners, Uganda’a Jackson Kiprop will be one of the favourites, having picked a bronze in the 2019 edition and achieved a personal best of 2hrs 08mi 28sec. African runners are likely to dominate the main marathon in both men and women categories. Other fancied male runners are Kenyan duo of Eluid Too and Timothy Kipchumba, Uganda’s Bernard Cheptoch and Burundi’s Onesphore Nzikwinkunda.

In the women’s section, Uganda’s Rebecca Cheptegei (personal best of 2:31.21), Kenya’s Emmah Cheruto Ndiwa and Sophy Jepchirchir and Ethiopia’s Kidist Fiseha are among the front runners.

The half marathon has attracted New York City Marathon bronze medallist, Italy’s Eyob Faniel, along with Great Britain’s national champion Jonny Mellorin the men’s category while runner-up at Porto Marathon Aynadis Mebratu of Ethiopia along with her countrymates, Bikile Teferi and Alamrew Tirusew are the top draw in women’s section.

Finishers in all races will receive a commemorative medal to mark their achievement.

The organisers also announced that the event car parking will be at the Civil Aviation Authority and shuttle buses will ferry the runners and guests.