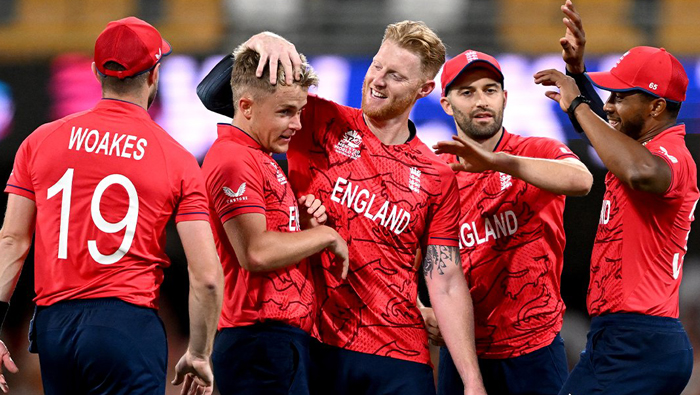 Brisbane : Jos Buttler's blistering 73 followed by a superb bowling effort from bowlers helped England keep their semifinals hopes alive with a 20-win over New Zealand in the ongoing ICC T20 World Cup, at the Gabba in Brisbane on Tuesday.

With the win, England climb up to the second spot in the group 1 points table. And that's also New Zealand's first loss of the tournament. Glenn Phillips top-scored for New Zealand with 62 off 36 deliveries while skipper Kane Williamson scored 40 off 40 balls. For England, Chris Woakes and Sam Curran bagged two wickets each.

Chasing a target of 180, New Zealand got off to a bad start as they lost their opener Devon Conway for three on the delivery of Chris Woakes. Skipper Kane Williamson then came out to bat.

New Zealand opener Finn Allen and Williamson then opened their hands and slammed Woakes for 12 runs with a stunning four and six.

Sam Curran struck in his first over as he removed set batter Finn Allen for 16 off 11, leaving New Zealand tottering at 28/2. The right-handed batter Glenn Phillips then came out to bat.

Phillips and Williamson took their team's total beyond the 50-run mark in the 8th over of the innings. After 10 overs of the game, New Zealand's score read 66 with a loss of two wickets.

The duo of Phillips and Williamson brought up their crucial 50-run partnership in 38 deliveries to ease some pressure from their team. The danger man Phillips started playing aggressively and slammed England bowlers all around the ground.

While hammering Adil Rashid for 17 runs in an over Phillips brought up his half-century in just 25 balls in the 14th over of the innings.

Rashid then gave his team a big breakthrough as he dismissed Williamson for 40 off 40. James Neesham then came out to bat. After 15 overs of the match, New Zealand needed 57 runs in 30 balls.

Neesham's stint on the crease was cut short as he was sent packing by Curran for 6 off 3, leaving Kiwis tottering at 126/4.

Daryl Mitchell then came out to bat on the crease, but the latter could not do much as he was sent back to the pavilion after scoring 3 off 5 on the delivery of Woakes.

Mitchell Santner then came out to bat. Curran then gave New Zealand a huge blow as he dismissed well-set batter Phillips, who played superb innings of 62 off 36.

In the second penultimate over of the innings, Mitchell Santner and Ish Sodhi slammed Woakes for 14 runs. In the last over New Zealand's batter could only manage to gather 5 runs and handed a 20-run victory to England.

Earlier, blistering half-centuries from openers Jos Buttler and Alex Hales powered England to a competitive 179/6 in their 20 overs in their crucial Group 1, Super 12 match.

England was in a better position at 125/2 in 15 overs, but the Kiwis made a strong comeback in the final five, taking four wickets and giving away 54 runs. Buttler (73) and Hales (52) shared an 81-run stand for the first wicket. Lockie Ferguson was the pick of the bowlers for NZ with 2/45.

Opting to bat first, England was off to a great start. Skipper Jos Buttler was the anchor while Hales slowly took the aggressor role, smashing pacer Tim Southee for 15 runs in the fifth over, which also consisted of two fours and a six.

Hales brought up his 11th T20I half-century in 39 balls, with a slash down the deep third man that went for four.

The 81-run stand between Hales-Buttler broke after spinner Mitchell Santner dismissed Hales for 52 off 40 balls after he was stumped by wicketkeeper Devon Conway.

Moeen Ali was next up on the crease. Buttler punished pacer Lockie Ferguson in the 13th over, hitting him for three fours. England crossed the 100-run mark in the same over.

It was yet another spinner who took the wicket for NZ, as Ish Sodhi dismissed Moeen for just five off six balls. The batter was caught by Trent Boult at long-on.

Harry Brook was the next batter to arrive at the crease and he hit a six on his second ball but was dismissed by Tim Southee on the very next ball. Buttler departed soon for 73 off 48 balls, consisting of seven fours and two sixes. Half of England's lineup was in the hut for 162 runs.

Ben Stokes and Sam Curran had to take England to a more competitive total with some hitting. Ferguson dismissed Stokes lbw for 8 off 7 balls. England finished at 179/6, with Dawid Malan (3*) and Curran (6*).

Lockie Ferguson was the lead bowler for the Kiwis, taking two wickets. Sodhi, Southee and Santner took a wicket each for the Kiwis.