Conditions have made contests a level-playing field: Dravid ahead of T20 WC clash with Bangladesh 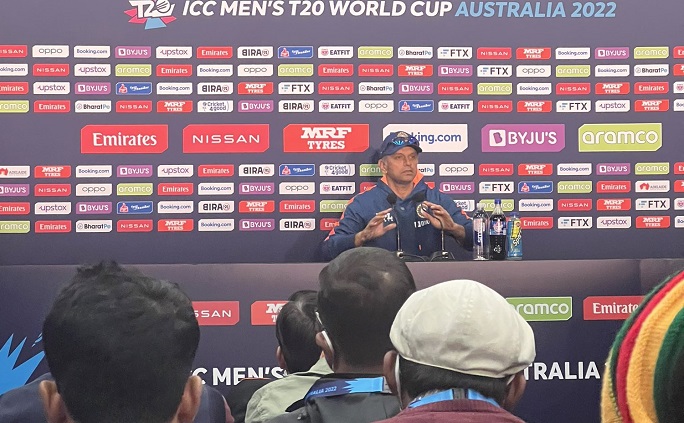 Adelaide : Indian head coach Rahul Dravid said on Tuesday ahead of the ICC T20 World Cup clash against Bangladesh that no teams can be taken lightly and Australian conditions have created a "level playing field" for every team in every contest.

Team India will take on Bangladesh in their Group 2, Super 12 match of the ICC T20 World Cup in Adelaide on Wednesday. "We cannot take any team lightly. At times, it is two hits here and two there. These conditions have made the contest a level-playing field. The grounds are big," said Dravid in a pre-match press conference.

Dravid said that the team respects Bangladesh as a side and will be meticulous against them.

Questioned about the team's plans if rain comes into play, Dravid said that the general chat is about controlling what is in the team's hands. "If weather forces us to play 10-12 overs, we will respond accordingly."

About Virat Kohli's privacy breach, Dravid said, "Obviously it is disappointing. We have flagged it With the concerned authorities. Virat has dealt with it nicely."

Star Indian batter Virat Kohli on Monday expressed shock at the "appalling" video of his Perth hotel room that surfaced on social media and said he was disappointed by the "fanaticism and absolute invasion of privacy."

The video shared purportedly takes a tour of Virat's room with shoes, suitcases, a visual of the room's washroom, some personal belongings.

At one point in the video that was titled " King Kohli's hotel room" a man who is apparently filming the video opens the wardrobe where the viewer gets to see an iron box.

"I understand that fans get very happy and excited seeing their favourite players and get excited to meet them and I've always appreciated that. But this video here is appalling and it's made me feel very paranoid about my privacy. If I cannot have privacy in my own hotel room, then where can I really expect any personal space at all??" Virat posted on his Instagram account.

Virat added: "I'm NOT okay with this kind of fanaticism and absolute invasion of privacy. Please respect people's privacy and not treat them as a commodity for entertainment."

Crown Towers Perth issued a statement after the incident.

"We unreservedly apologise to the guest involved and will continue to take the necessary steps to ensure this remains an isolated incident," the hotel management said in a statement. "Crown has taken immediate steps to rectify the issue. The individuals involved have been stood down and removed from the Crown account, and the original video was swiftly removed from the social media platform," Crown Towers was quoted as saying by ESPNCricinfo.

"Crown is conducting an investigation with the third-party contractor and will take any further steps necessary to ensure an incident of this nature does not happen again. We are also cooperating with the Indian Cricket team and the International Cricket Council to convey our apologies and will continue to work with them as we progress the investigation," they added.

The International Cricket Council (ICC) has also expressed its disappointment with the incident in a statement.

The ICC said it was "incredibly disappointed by the gross invasion of privacy" that Kohli had faced.

"We continue to work with event hotels and security providers to ensure that this remains an isolated incident and player privacy is fully respected at all times," added ICC.

About the team's previous match against South Africa, Dravid said that a score of 150 could have done the job for the team since a score in the 130s nearly did it for them.

On his team's performance as a fielding unit, the head coach said, "We have been good. We missed out on a few chances in the previous game. We fielded well in the other two games, especially against Pakistan."

Coming to India's match, the Men in Blue are heading into the game after a five-wicket loss to South Africa. On the other hand, Bangladesh won their previous game against Zimbabwe by three runs.