We will try to create an upset: Shakib ahead of India clash 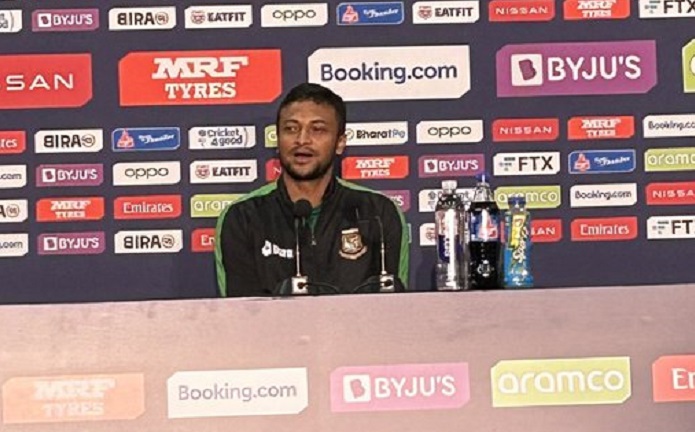 Adelaide : Bangladesh captain Shakib Al Hasan hailed India as favourites for winning the T20 World Cup and mentioned that his team would try to create an upset by winning its match against the 'Men in Blue' ahead of their clash on Tuesday.

Bangladesh will have an uphill task on their hands when they lock horns with India on November 2, Wednesday at the Adelaide Oval in the ongoing T20 World Cup. Shakib touted his team as underdogs going into the match and said, "India are favourites. They are here to win the World Cup. If we beat them then it will be upset and we will try to create an upset. We are not the favourites going into the match."

The left-hander talked about the change of venues for the team and termed it challenging, having played their first match in Hobart and then flying in at different locations before clashing against the Indian team at the Adelaide Oval.

"It is a little difficult as we played our first game in Hobart, especially for teams coming in from the sub-continent. It will be a good contest and I think our team will enjoy it," said Shakib.

Talking about the Indian players to watch out for during their encounter, he mentioned Suryakumar Yadav and youngster Arshdeep Singh, who have been in sublime form since their inception in the Indian limited-overs team. The all-rounder also mentioned a team meeting to devise a plan for the two Indian players to negate their threat.

"Surya Kumar Yadav is playing really well. He is one of the best batters. I saw Arshdeep for the first time In IPL and he is bowling really well right now. We have not done a team meeting but we will do that. We will make our plans. Some will work and some won't work and that's how the game is," mentioned the Bangladesh captain.

Talking about the role of S Sriram in the team, he said, "S Sriram has done well. He came up with a plan. In this short term, he has done something very well for our team which is a young side."

"Weather conditions are extreme and it is tough to adjust but as professionals, we need to adjust to these conditions," expressed Shakib referring to the cold and damp conditions that have been witnessed in Australia until now.