T20 WC: Fifties from Rohit, Virat and Suryakumar guide India to 179/2 against Netherlands 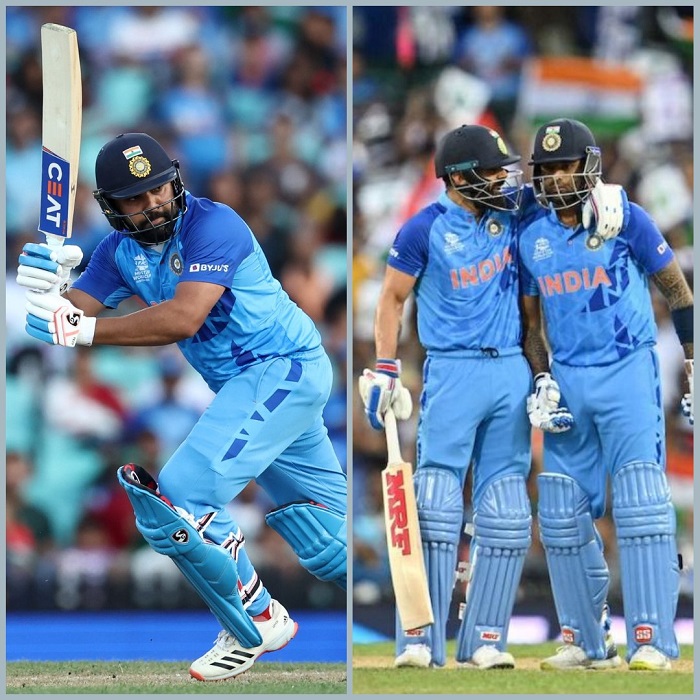 Sydney : Half-centuries from star batters Virat Kohli, Rohit Sharma, and Suryakumar Yadav guided India to a competitive 179/2 in 20 overs against the Netherlands in their Group 2, Super 12 match of the ongoing ICC T20 World Cup at Sydney Cricket Ground (SCG) on Thursday.

Batting first, India was off to a shaky start as they lost opener KL Rahul for 9 off 12 balls after a medium pacer Paul van Meekeren trapped his leg before the wicket. India was 11/1 in 2.4 overs.

Star batter Virat Kohli joined Rohit Sharma on the crease in the third over. The duo took India through the powerplay safely, without any further fall of a wicket. However, the Netherlands kept Indian batters subdued with their great line and length. At the end of six overs, India was at 32/1, with Kohli (6*) and Rohit (16*) at the crease.

Both batters did hit some big shots, but they struggled to connect properly and big outfields forced them to satisfy themselves with doubles. The duo brought up their 50-run stand in 41 balls, surviving many mistimed hits and catch attempts.

Rohit Sharma brought up his half-century in 35 balls with a four, his 29th in the format. Kohli on the other hand still could not score a boundary. The 75-run stand between the duo was broken after Rohit was caught by Colin Ackermann at deep-midwicket on a delivery by medium pacer Fred Klassen. The skipper scored 53 off 39 balls with four boundaries and three sixes.

Suryakumar Yadav joined Kohli on the crease and the latter also broke his boundary drought with a straight four over the bowler's head. A four by Suryakumar took India to the 100-run mark in 13.2 overs.

Suryakumar kept showing his impressive range of shots, helping Men in Blue reach 114/2 in 15 overs, with Kohli (32*) and Suryakumar (17*). The 16th over was good for India as it gave them 14 runs. In the next over, Virat also hit some attractive shots to bring up his second straight fifty in the tournament in just 36 balls, which was also his 35th in the format. The 17th over gave away 16 runs.

A boundary from Suryakumar helped India cross the 150-run mark in 17.5 overs.

Suryakumar and Virat kept on piling runs, helping India finish at 179/2 in 20 overs. Suryakumar brought his fifty with six on the last ball. Virat finished with 62* off 44 balls with three boundaries and two sixes while Suryakumar finished with 51* off 25 balls with seven fours and a six. The duo formed an unbeaten 95-run stand in 48 balls.

Fred Klaassen and Paul van Meekeran took a wicket each for Dutch.