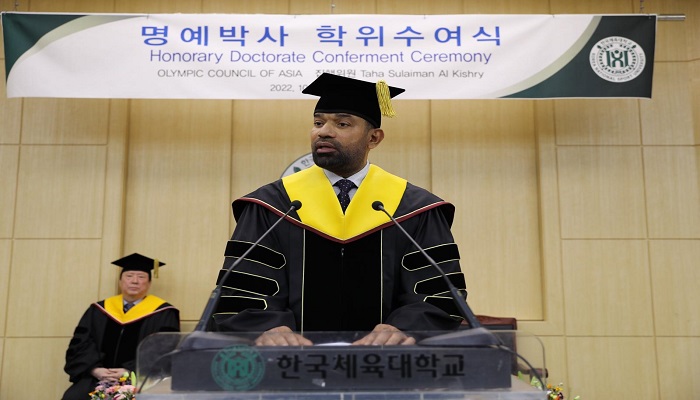 Muscat: In a rare honour, a top Omani sports administrator has been bestowed the honour of an honorary doctorate recently.

Taha al Kishry, who wears many hats as a sports administrator, was awarded a honorary doctorate by the Korea National Sport University (KNSU) in Seoul.

Kishry, who is the president of the Oman Swimming Association (OSA) and secretary general of the Oman Olympic Committee (OOC) was honoured for his “distinguished services and efforts to support international and continental sports organisations”.

After receiving the doctorate, Kishry said: “The doctoral degree is a landmark moment in my sports administration career.”

Established in 1977, Korea National Sport University (KNSU) is the only national sport university in Korea and has produced many outstanding sports leaders, as well as elite athletes and coaches of world-class calibre.

Kishry said: "This honour was possible only due to the strong support I have received from His Highness Sayyid Theyazin bin Haitham, Minister of Culture, Sports and Youth. I thank the OOC chairman Sheikh Khalid bin Muhammad al Zubair for his trust and all my fellow administrators at the OOC who have believed in me and backed my stints with the international sports organisations.”

The top Omani sports administrator added: "The decision by Korea National Sports University to grant me the honorary doctorate is a great honour not just for me but for Oman. It is a reward to my decades of work in sports field at national and global level. Among those previously awarded were IOC President Thomas Bach and IOC Vice-President Ser Miang Ng in 2017 for their contribution to the promotion of international peace through the Olympic Games.

Kishry said: “This occasion is an exceptional event and a historic milestone in my sports career. This will motivate me more to contribute more to sports at all levels.”

Dr Ahn Young-kyu, President of the Korea National University of Sports presented the award to Kishry. He said: The honour is awarded to sports personalities who have contributed to enriching the international sports movement and in recognition of their great services that had a positive and tangible impact on the development of the Olympic movement locally and internationally".