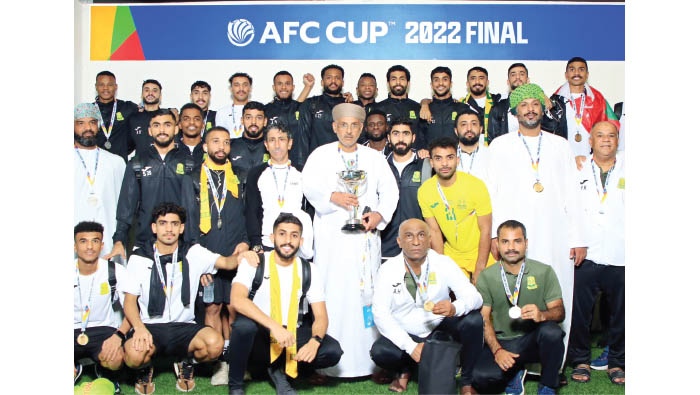 Muscat: He has guided the national team to many memorable wins as a coach and has been one of the most decorated coaches in the Sultanate of Oman. Meet Rasheed Jaber, who on Saturday, added a glorious chapter to the Oman football history as he led Seeb Club to AFC Cup title in Kuala Lumpur, Malaysia.

Seeb became the first Omani club to clinch a continental title as they outplayed Kuala Lumpur City 3-0 in the final of the 2022 AFC Cup, the 18th edition of the second-tier Asian club championship, organised by the Asian Football Confederation (AFC).

A smiling Jaber in his post-match comments said: “This title triumph heralds the start of more success for the club. I can’t explain my feelings.

“It’s a dream come true. We’ve been waiting to realise for almost 50 years, and its real now.”

The 58 year old Jaber, who took over as helm of Seeb in September earlier this year, said: “We worked hard from the beginning to reach this point, and my players did a really good job. They scored three goals and won the cup, which was excellent.

“I’m happy for them, the club and Oman football. This is our first time becoming Asian champions, and hopefully this is just the beginning.”

Prior to Seeb’s stint, Jaber had coached Dhofar, Suwaiq and Muscat clubs in Oman. He has been at the helm of the national senior team twice, first in 1995 and then in 2002.

A former Oman international, Jaber was also the U19 national team coach from 2014-17.

Despite the emphatic scoreline, KL City did have their moments in front of goal but simply couldn’t get past goalkeeper Ahmed Faraj Al Rawahi and Jabar praised his charges for their mental fortitude.

“They had some chances but we knew how they play and their strengths. If we allowed them free-kicks, it would be very dangerous for us. No. 28 (Paulo Josue) is a very talented and good player, and he can shoot from everywhere, but we managed to stop them.”

“Tactically we proved ourselves on the field and that’s why we won. Three goals in the final is not easy, (especially) against a well-organised defensive team.

“But our players were mentally strong and fought from the beginning, and proved our system.”

Shaikh Salman said: “On behalf of the Asian football family, I would like to extend my wholehearted congratulations to Al Seeb Club for securing their first-ever AFC Cup title.

“Everyone at the club, from the officials to the backroom staff deserve praise for working tirelessly to create history and I am confident that this achievement is just a sign of more to come from Al Seeb Club in the AFC’s competitions.”

“We must also commend Kuala Lumpur City FC for showcasing incredible character and team spirit to emerge as only the second Malaysian club to reach the final.”

“The AFC has outlined its vision and mission to ensure our teams and players continue to develop through top class competitions, and the presence of two first-time finalists in this year’s AFC Cup final is testament that we are steadfast in delivering on that promise.”