How much could it cost to rebuild Ukraine? 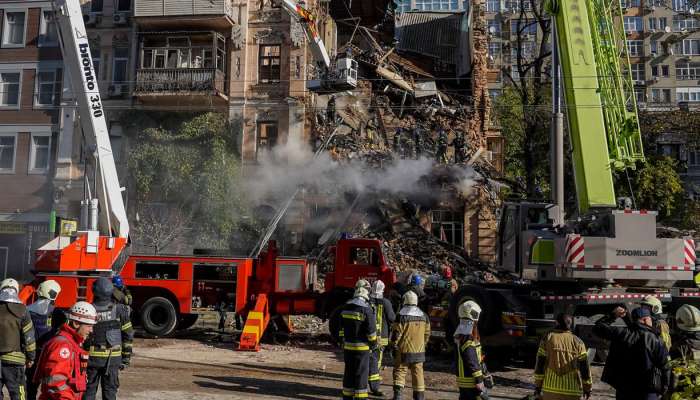 Kviy: Exactly eight months to the day since Russian tanks first rolled into Ukraine, Moscow's forces are intensifying their attacks on its neighbour's energy infrastructure.

Russian shells and drones have also targeted Ukrainian cities for the first time in months, including the capital Kyiv, in retaliation for recent Ukrainian military gains.

As Moscow escalates the conflict, Germany will this week host two summits in Berlin aimed at helping Ukraine quickly rebuild its critical infrastructure and ensure the country's postwar recovery.

The first event, on Monday, will be a German-Ukrainian economic forum; while the second, on Tuesday, is the Recovery of Ukraine conference organised by the German government in its role as the current holder of the rotating G7 presidency and the European Commission.
Berlin has insisted that Tuesday's event is a summit of experts, not a donor conference. Representatives from the G7 and G20 leading economic powers are expected to attend alongside international organizations, civil society and business leaders.

War bill grows by the day
Meanwhile, the mammoth cost of supporting Ukraine against Russia's forces is multiplying day by day.

At least a third of the existing loans and grants pledged by the rest of the world go to plug a roughly €4 billion ($3.94 billion) monthly shortfall in the Ukrainian government budget.

The European Union, along with the United States and other countries, including Britain and Canada, already jointly committed €93 billion in weapons, loans, and humanitarian aid to the Kyiv government between February and early October, according to a tally by the Kiel Institute for the World Economy.

With an estimated 30-35% contraction in gross domestic product this year alone, Ukraine is already struggling to pay for the war, let alone meet its existing debt commitments or its own reconstruction.

In a joint article for the Frankfurter Allgemeine Zeitung newspaper published Monday, the pair said a "generational effort" to rebuild Ukraine must begin immediately.

"We have to start building destroyed residential buildings, schools, roads, bridges — the infrastructure and the energy supply now so that the country can get back on its feet quickly," the two European leaders wrote.

"The shape of the reconstruction will determine which country Ukraine will be in the future. A constitutional state with strong institutions? An agile and modern economy? A vibrant democracy that belongs to Europe?"

In his video podcast on Saturday, Scholz said the international community would need to make a huge commitment to Ukraine's reconstruction in order "to make it work well"  and said countries would need to pledge financial support for  "many, many years" or even "decades."

In August, the World Bank, the European Commission and the Ukrainian government put aggregate losses in the country as of June 1 at more than $252 billion, with estimated reconstruction and recovery needs at $348.5 billion.

But that was before Russia stepped up its conflict by targeting Ukrainian power facilities and cities.

An op-ed that appeared in The Washington Post this weekend estimated the bill could even reach $1 trillion.

Schmyhal called for the release of the estimated $300-500 billion in Russian assets frozen by Western sanctions in retaliation for launching the war, which could be used for reconstruction.

"We should develop a mechanism for seizing Russian assets," he urged.

Donor nations must grapple with the prospect of huge financial commitments to Kyiv while many deal with their own high levels of indebtedness, surging inflation and slowing economic growth.

At the same time, they will be looking for cast-iron guarantees from Kyiv that the funds will be used for their intended purposes. After all, the group Transparency International has ranked Ukraine as Europe's third-most-corrupt country after Russia and Azerbaijan.

The editorial by The Washington Post detailed how hundreds of millions of dollars in foreign aid has been siphoned off in recent years by Ukrainian oligarchs, describing how the government has been complicit in allowing them to use Ukraine’s state-run companies as ATMs.

EU must address donation deficit
Corruption concerns may explain the EU's hesitancy in committing and dispersing funds to the Kyiv government until now, compared with the US, as noted by Kiel's Ukraine Support Tracker.

"The US is now committing nearly twice as much as all EU countries and institutions combined," wrote Christoph Trebesch, head of the team compiling the tally.

"This is a meager showing for the bigger European countries, especially since many of their pledges are arriving in Ukraine with long delays. The low volume of new commitments in the summer now appears to be continuing systematically."

Guy Verhofstadt, a European parliamentarian from Belgium, also lambasted the EU's response on Twitter last week, saying "Europe is slow to pledge and even slower to deliver," labeling the policy "political amateurism & geopolitical madness."
European leaders will be keen to learn from the mistakes of previous postwar rebuilding efforts, including in Afghanistan, Iraq and Bosnia, and will likely insist that Ukraine show concrete plans to make the rule of law and judicial reforms needed to weed out corruption before they disperse with billions of reconstruction funds.