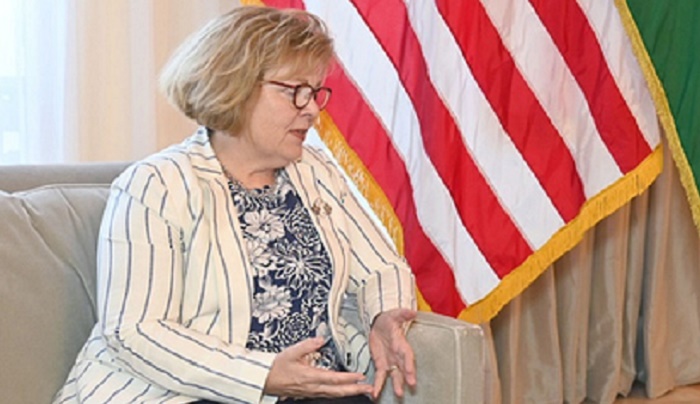 Barbara Leaf, Assistant Secretary of State for Near Eastern Affairs of the United States of America. Photo: ONA

Muscat: The central role played by the Sultanate of Oman in backing endeavours to achieve regional security and peace have been underscored by Barbara Leaf, Assistant Secretary of State for Near Eastern Affairs of the United States of America (USA).

Her visit to the Sultanate of Oman comes within the context of consultation and discussion of a range of topics and bilateral issues of regional dimension, she added in a press statement to Oman News Agency (ONA).

She said that the advanced relations between the two countries and issues of common concern were discussed during meetings with Omani officials.

She also said that her country aspires to further develop the bilateral relations between the two countries and expand the level of cooperation to cover areas of climate, education, culture and science, in addition to enhancing economic, trade and investment relations.

Barbara Leaf, Assistant Secretary of State for Near Eastern Affairs of the United States also commended the Omani benign efforts in relation to the situation in Yemen.  She dubbed such efforts as “irreplaceable”.

She added that Oman’s partnership, endeavours and diplomacy are “quite critical” in the same issue.

Within the same context, the US official added that the Omani efforts have been central to US successful efforts together with regional partners and the United Nations (UN).

She reiterated the good efforts of Tim Lenderking, US Special Envoy to Yemen to foster truce of two months and to keep extending it.

The US Assistant Secretary of State for Near Eastern Affairs said that she visited the National Museum of Oman.

She expressed her admiration of the exhibits depicting the deep, long, historical relationship between the United States and Oman, which is going back to 1833.