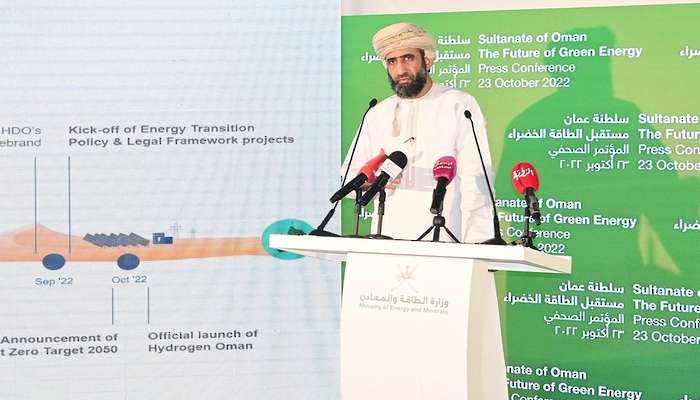 Muscat:  The Sultanate of Oman‘s focus on new low-carbon energy industry got a boost on Sunday when the Ministry of Energy and Minerals announced plans to invite estimated $140 billion investments in green hydrogen.

Eng Salim Nasser al Aufi, Minister of Energy and Minerals, unveiled the plans at a press conference on Sunday where the government also announced the establishment of a new hydrogen-centric energy company, HYDROM.

The new company will accelerate the country’s vision for the growth of a green hydrogen-based energy future and help the Sultanate‘s pledge to achieve net zero emission by 2050.

Under the leadership of His Majesty Sultan Haitham bin Tarik, Oman has committed to reaching Net Zero Emission in 2050, in line with the Paris Agreement’s objectives of limiting global warming to 1.5°C compared to pre-industrial levels.

And recently, His Majesty also set up Oman Sustainability Centre to lead the nation’s transition towards a green economy.

The centre will be the leading body undertaking supervision and follow-up plans and programs of carbon neutrality.

Al Aufi said: “Oman is committed to decarbonise and help the world decarbonise. The pathway to net zero is an opportunity for Oman to create economic value, increase industrial competitiveness and attract investments to help diversify and strengthen the country’s economy.

“Green hydrogen presents itself as a key vector that enables Oman to pursue its decarbonisation, economic and energy security objectives. With abundant renewable energy resources Oman is blessed with and with the appropriate structuring of the sector via the creation of Hydrogen Oman as directed by His Majesty, Oman is positioned as one of the most attractive nations to produce green hydrogen competitively and on a large-scale.”

Oman has set an ambition to become one of the largest green hydrogen producers and exporters globally, targeting production of one million tons by 2030.

Mazin Al Lamki, Chief Executive Officer of Energy Development Oman, said: “We are delighted to announce the new brand identity of HYDROM, a fully owned autonomous subsidiary of EDO. Working in tandem with the ambitious Government plans, HYDROM will leverage the Sultanate of Oman’s location and abundant solar and wind resources to produce green hydrogen and support the government’s drive to reduce the carbon footprint and achieve the decarbonisation targets.”

HYDROM’s mandate includes the delineation of Government-owned land areas and the structuring of associated large-scale world-class green hydrogen projects, managing the process for their allocation to developers as well as facilitating the development of common infrastructure and connected ecosystem industries and hubs in close collaboration with the Public Authority for Special Economic Zones and Free Zones (OPAZ).

On 6 November, HYDROM will be opening a first public bid round aimed at awarding the first land blocks by 2023 to meet the 2030 production target.

Dr Firas Al Abduwani, Acting Managing Director of HYDROM, said: “We at HYDROM look forward to working with international partners to build the future of energy. The bid round we announced today is the first of its kind globally and we are convinced it will help accelerate the development of the green hydrogen industry in Oman and globally.”

Eng Faiza Al Harthi, Head of Energy, Environment and Natural Resources Priority Support at Oman Vision 2040 Implementation Follow-up Unit said: “The vision is to create effective, balanced, and resilient ecosystems to protect and sustain Oman’s natural resources in support of the national economy. This will be done by setting targets, a measurement mechanism and a follow-up methodology for the initiatives and projects helping to achieve net zero emissions.”

Eng Abdulaziz al Shidhani, Director General Renewable Energy and Hydrogen said: “Oman aims to become one of world’s leading green hydrogen hubs. Over the last few months, the Ministry of Energy and Minerals has developed an ambitious green hydrogen strategy and defined the structure of the green hydrogen sector. The development of the green hydrogen economy will provide a strategic opportunity for Omani and international companies to participate and collaborate in driving local and global energy security, economic diversification and much needed climate change mitigation.”

Later in a press statement, Najla Zuhair Al Jamali, CEO, Alternative Energy, OQ, said: “Oman’s energy mix is undergoing a stimulus shift as the country forges ahead in its drive to build a hydrogen-centric economy that will support Vision 2040 diversification efforts.

“As an Omani integrated energy group, OQ, represented by OQ Alternative Energy, is well poised to enable the collective efforts to achieve our national economic goals and reach net zero by 2050. Working closely with Ministry of Energy and Minerals, and the Oman Sustainability Centre, OQ AE is charting a clear pathway for decarbonization and carbon neutrality. In addition to acting responsibly, we believe that the partnerships we are forging and projects that we are developing will place Oman on the global map for Green Hydrogen.”

These new ambitious sustainability initiatives come a few weeks before COP27 in Egypt, in which Oman is set to take part.

With inputs from ONA