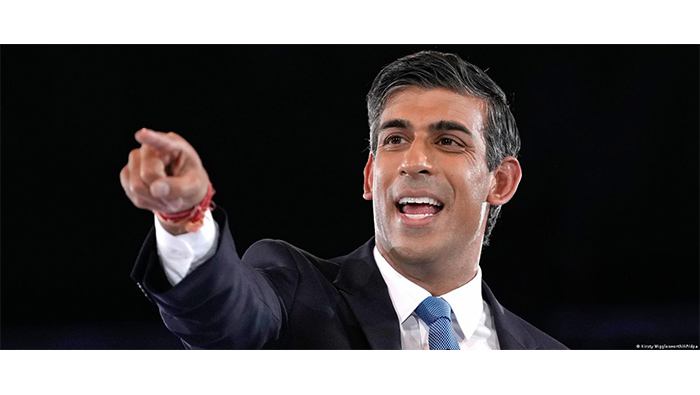 "The United Kingdom is a great country but we face a profound economic crisis," he said on Twitter.

"That's why I am standing to be leader of the Conservative Party and your next prime minister."

It is the 42-year-old's second bid to become prime minister in a matter of months. Sunak was defeated by Truss in a party leadership vote in September in the wake of former Prime Minister Boris Johnson's downfall.

This time, Sunak appears have more party support than his rivals — former Defense Minister Penny Mordaunt and Johnson. Mordaunt declared her candidacy on Friday. Johnson has not confirmed that he plans to run but was said to be lobbying party members for backing.

UK to get third PM this year
The leadership race follows Truss's decision to step down on Thursday after just 45 days in office.

The Conservative party is holding an accelerated contest to finalise a new prime minister within a week.

Under the rules, only three candidates can take part in a vote by lawmakers on Monday. The party's 172,000 members will then decide between the top two in an online vote on Friday.

Candidates need 100 nominations from Tory lawmakers in order to qualify. According to unofficial tallies by Sky News and the BBC, Sunak has the backing of over 120 lawmakers.

"There will be integrity, professionalism and accountability at every level of the government I lead and I will work day in and day out to get the job done," Sunak said in a statement.

"I am asking you for the opportunity to help fix our problems."

Some 24 lawmakers have given their support publicly to Mordaunt, while Johnson is said to have the support of around 50. Dozens of Britain's 357 Conservative lawmakers have not yet said who they will back.

Mixed feelings about Johnson's return
Johnson was forced out of office in July amid scandal after Sunak quit as finance minister, triggering a wave of resignations. The former prime minister's apparent comeback bid has received mixed reactions from within his own party. Supporters say he is a popular figure who can win votes, while critics warn his return would signal catastrophe for the future of the party.

"This isn't the time for Boris," Sunak-supporting Northern Ireland minister Steve Baker told Sky News. He said another Johnson-led government "would be a guaranteed disaster" and implode within months.

"Voters out there love him and he's a wonderful man — but he doesn't have that meticulous compliance with tedious rules," he added.

The main Labour opposition, meanwhile, is calling for a general election.

"The country needs to get rid of this chaos," Labour leader Keir Starmer told the BBC.