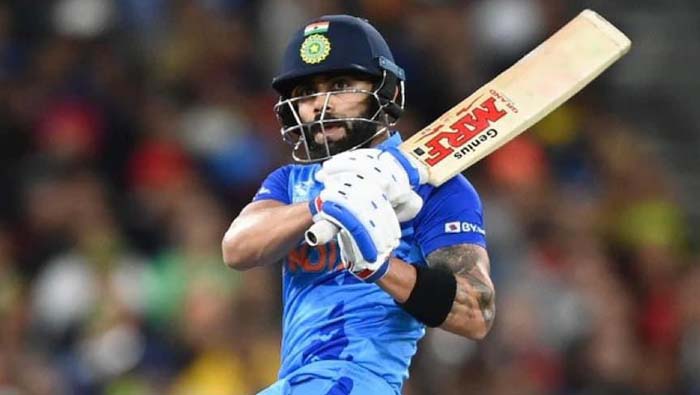 With this win, India is at top of Group 2 with two points. Chasing 160, India got off to a terrible start as opener KL Rahul was sent back to the pavilion by the pacer Naseem Shah for just four of eight balls. The opener disappointed in a crucial match once again, with an inside edge landing straight into the stumps. India was 7/1 at this point.

India received second jolt when captain Rohit nicked one straight into the slips to Iftikhar Ahmed. The skipper lost his wicket for just 4 off 7 balls to pacer Haris Rauf. India was two down at 10 runs in 3.2 overs.

Eyes were on Suryakumar Yadav and Virat Kohli once again to stitch another partnership. Suryakumar started with a silky straight drive and took three on the very next ball.

Suryakumar was looking really good, but Rauf got the big fish after he nicked one to wicketkeeper Mohammad Rizwan. India endured another huge blow as Suryakumar was back in the pavillion for just 15 off 10 balls. India was 26/3 in 5.3 overs.

Axar Patel was the next batter on the crease. At end of powerplay in six overs, India was 31/3, with Virat (5*) and Axar (2*) at the crease. Patel also walked back after an unfortunate run-out for just 2. India had sunk to 31/4. Patel's dismissal though involved Rizwan fumbling the runout and not hitting the stumps with the ball fully, but he got away with it.

Pandya and Kohli took India safe halfway their innings, though singles continued without any boundaries. India was at 45/4 in 10 overs, with Virat (12*) and Pandya (7*) at the crease.

India reached the 50-run mark in 10.3 overs. Pandya hit Mohammad Nawaz for a huge six at the start of the 12th over, hitting the first six of the innings. Nawaz was hit for two more sixes, including a straight hit by Virat, giving India a valuable over which gave them 20 runs.

The duo brought up their 50-run stand in 40 balls.

Rauf swung some momentum to Pakistan's side with an economical 16th over, conceding six. India needed 54 off 24 balls. Six runs came from the next over, reducing the equation to 48 off 18 balls.

Virat reached his half-century in 43 balls. The star batter swung tides in favour of India once again, helping India get 17 more runs. Men in Blue needed 31 off 12 balls.

After Rauf dominated the 19th over, Virat swung things into India's favour with two sixes in two balls. India needed 16 in the final over.

This pair of beloved players had to strike big in the last over, having scored 113 off 77 balls in their 77 balls. Pandya departed to Nawaz's first ball, scoring 40 off 37 balls. India needed 16 off 5 balls and the 'Finisher' Dinesh Karthik was at the crease with Kohli. However, he was also stumped with two runs left and one ball to go.

Ashwin finished the match with a single, helping India clinch a four-wicket win. India finished at 160/6, with Kohli scoring an unbeaten 82 off 53 balls, with six fours and four sixes and Ashwin unbeaten at 1.

Early, fiery and top bowling spells by Hardik Pandya and Arshdeep Singh helped India restrict arch-rivals Pakistan to 159/8 in the high-voltage clash of the Super 12 stage of the ongoing ICC Men's T20 World Cup at the iconic Melbourne Cricket Ground (MCG) in Melbourne on Sunday.

Shan Masood top-scored for Pakistan with 52 not out while Iftikhar Ahmed played a crucial knock of 51 runs.

Opted to bowl first, Bhuvneshwar Kumar's fiery bowling gave an excellent start to India as he restricted Pakistan batters from scoring runs. In the second over of the innings, Pakistan suffered a huge blow as their star batter Babar Azam was sent packing for a first-ball duck by Arshdeep Singh without scoring a run.

New batter Shan Masood then came out to bat. In the fourth over of the innings, Arshdeep struck again as he dismissed Pakistan opener Mohammad Rizwan for 4 runs off 12 deliveries, leaving Men in Green tottering at 15-2. Arshdeep Singh the left-arm pacer removed both the Pakistani openers inside the powerplay to provide India with the upper hand in the match.

Iftikhar Ahmed then came out to bat. Iftikhar and Masood both opened their hands and slammed boundaries at regular intervals. After the powerplay, Pakistan's score read 32-2.

Despite being under pressure the duo of Iftikhar and Masood took their team's total beyond the 50-run mark in the 9th over of the game. After 10 overs of the game, Pakistan's score read 60/2.

Iftikhar shifted gears and slammed back-to-back two huge sixes, hammering Axar Patel for 21 runs in the 12th over of the innings. While slamming the Indian bowlers all around the ground Iftikhar brought up his half-century in 32 deliveries.

Mohammed Shami was brought back into the attack and he removed dangerman Iftikhar for 51 off 34. Pakistan's 76-run stand for the third wicket was finally broken.

Shadab Khan then came to the crease but the batter could not do much as he was sent back to the pavilion by Hardik Pandya after scoring 5 runs off 6 balls in the 14th over. In the same over Pandya struck again as he dismissed the new batter, Haider Ali, for 2 runs, the Pakistani batter was caught out by Suryakumar Yadav.

Mohammad Nawaz welcomed Pandya's spell with a stunning four, however, his stint was cut short after scoring just 9 runs in 6 deliveries. At this point, Pakistan kept losing wickets at regular intervals. Arshdeep then delivered a stunning delivery to remove Asif Ali who was caught behind the wicket by Dinesh Karthik.

While hammering Indian bowlers all around the ground Shan Masood brought up his third T20I fifty in 40 balls. In the penultimate over of the innings, Shaheen Afridi slammed one four and one six on the delivery of Arshdeep.

In the last over, Bhuvneshwar sent Afridi packing after scoring 16 runs in 8 deliveries. New batter Haris Rauf then came to bat and he slammed a huge six to guide his team to a competitive total of 159/8 in 20 overs.